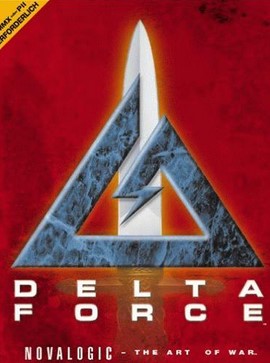 Delta Force is a tactical first-person shooter computer game by developer and publisher NovaLogic. It was released for Microsoft Windows in 1998, and re-released on Steam in 2009. Delta Force was designed to be a military simulation loosely based on the United States' Delta Force.

The player assumes the role of a Delta Force operative who takes part in military operations in various theatres. Objectives typically involve the elimination of a hostile presence in a region, assassinating a high-profile target, destroying military equipment or escorting POWs or civilians to an extraction point. Depending on the mission the player also needs to make it to an extraction point himself after fulfilling all other objectives. All five campaigns are available from the get-go and additional missions are unlocked as previous ones are completed. Sometimes multiple missions are unlocked at once and it is up to the player which order to play them in. The game features 40 missions in total.

Before each mission the player is able to choose his equipment. Default loadouts differ from mission to mission but the player can exchange it without any restrictions. The inventory is based on three slots: one for the main weapon, one for extra equipment and one for a sidearm.

Delta Force also features LAN and online multiplayer for up to 32 players. All missions from the singleplayer campaign can be played cooperatively with additional players replacing the AI-controlled Delta Force operatives. Additionally deathmatch, king of the hill and capture the flag are available, along with team variations.

Delta Force uses NovaLogic's own proprietary Voxel Space engine, known from their earlier games such as the Comanche series, which uses voxels to visualise terrain while polygons are used for rendering characters, vehicles, buildings and other details. This method allowed for draw distances and terrain detail unseen in first person shooters at the time and supported the game's attempt to simulate realistic outdoor combat at distances of up to several hundred meters. A limitation of the engine was that it did not support any form of 3D acceleration.

Next Generation reviewed the PC version of the game, rating it three stars out of five, and stated that "Though Delta Force's standalone play is often uninspired, the multiplayer is one of the most satisfying gaming experiences available today."

The game received "favorable" reviews according to video game review aggregator GameRankings. GameSpot's Michael Ryan awarded the game 9.1 out of 10, calling it "a very impressive game overall", particularly praising the game's mission and sound design, albeit pointing out its outdated visuals. He also drew comparisons to Tom Clancy's Rainbow Six, released earlier the same year, but noted Delta Force's limited preparation options compared to the latter. He also praised the multiplayer mode but noted that technical problems made it hard to play. PC Gamer Online's Todd Vaughn awarded the game 89%, also drawing comparisons to Rainbow Six but noting Delta Force's focus on long-distance fights and lower level of realism. He concluded: "Overall, Delta Force is a surprising and welcome addition to the genre that uses just the right mix of action and tactics to set itself apart from the crowd."