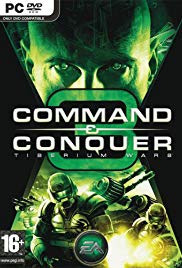 Command & Conquer 3: Tiberium Wars is a military science fiction real-time strategy video game developed and published by Electronic Arts for the Windows, Mac OS X and Xbox 360 platforms, and released internationally in March 2007. The direct sequel to 1999's Command & Conquer: Tiberian Sun by Westwood Studios which was taken over and liquidated by EA in 2003, Tiberium Wars returns the Command & Conquer series to its roots in the Tiberium story arc of the franchise, again featuring the factions of the Global Defense Initiative and the Brotherhood of Nod, and also introducing a new extraterrestrial faction known as the Scrin. An expansion pack to Tiberium Wars, titled Command & Conquer 3: Kane's Wrath, was released on March 24, 2008.

Tiberium Wars takes place about sixteen to seventeen years after the events of Tiberian Sun: Firestorm, at the advent of and during the "Third Tiberium War" when the Brotherhood of Nod launches a worldwide offensive against the Global Defense Initiative, abruptly ending 17 years of silence and temporarily crippling GDI. With the odds tipped in the Brotherhood's favor this time, GDI field commanders rally their troops and begin to combat Nod's second re-emergence, trying to restore lost hope. In the middle of it all, a new playable faction appears: the alien Scrin.

Command & Conquer 3 features returning aspects of gameplay from the previous series. The player oversees the action, ordering multiple units to move and attack targets. The construction yard, a moveable base, is the central platform from which the player constructs other structures. Certain structures can then produce units and resources are needed in order to fund the continuous building of structures and units. Typically the player's primary goal is to defeat an enemy by assaulting and destroying their base, while defending their own.

A supporting structure, a crane, can be constructed which can also construct structures. Thus, when multiple production structures of the same type, such as cranes and barracks, are built, the player is given more queues from which to train and produce units and structures. Though these simultaneously save time, funds are deducted for the extra cost as well; careful management of production, training units and funds are key to strategy. When a structure is built, the player can select anywhere near an existing structure to place it, gaining more territorial control.

Tiberium is the sole resource and is usually gathered from fields of Tiberium crystals scattered around the map. The crystals are gathered by harvester vehicles which unload their cargo into refineries, supplying the player with credits which are then automatically used when training units and building structures. Certain maps also feature Tiberium spikes, which, when captured by the faction's engineer unit, allocate a certain number of funds per second. Other neutral structures, such as an EMP weapon, are also present on maps to be captured. Base defense is provided by specialized defensive towers which are placed within a structure's territory.

All three factions have structures and units with similar functions at their disposal. However, they are adjusted to fit each faction's theme and have somewhat varying properties. Units can be classified into infantry, vehicles and aircraft, each with their own specialities. Unit effectiveness against opponents follows the rock-paper-scissors principle found in most real-time strategy games. Virtually every type of structure in the game acts as a tech tree and additional units, structures and faction-specific abilities will become available to research and create as new structures are built. Production and construction may become temporarily blocked if the required structures are destroyed, or if they are not provided with adequate power by the supporting "power plant" structures. A highly destructive superweapon for each faction can also be constructed and used after a certain timer expires. Once used, the timer must expire again before the superweapon can be activated for an additional time.

There are three factions playable in the game. The Global Defense Initiative fights with conventional modern weapons and tactics, utilizing both technologically advanced armor and firepower, making them typically more destructive in open confrontations, but more cumbersome. GDI's special weapon is the quintessential Ion Cannon, an orbital laser guided energy strike. The Brotherhood of Nod features flexible guerrilla warfare forces, using stealth and Tiberium-based weaponry, though they are typically weaker. Like in the original Command & Conquer, their superweapon is a Nuclear Missile. The third faction, the alien Scrin, features units and structures that are Tiberium based, including the ability to promote the growth of the substance and to store infinite amounts of it. The Scrin are immune to the radioactive effects of Tiberium but vulnerable to anti-Tiberium weapons. Their superweapon is the "Rift Generator", which creates a wormhole that pulls in nearby units.

The story driven single-player mode of Command & Conquer 3 consists of 38 missions, spread over three campaigns (17 GDI missions, 17 Brotherhood of Nod missions, and 4 Scrin missions). Each campaign depicts the view of its respective faction on the globalized "Third Tiberium War", with the portrayed story being furthered by full motion video cutscenes which play in between each of the individual campaign missions. Players can select to start with either the Global Defense Initiative or the Brotherhood of Nod campaign. However, both campaigns of the traditional two factions are required to be completed before the bonus campaign of the new third Scrin faction is unlocked and becomes playable.

Each campaign mission features main objectives, the completion of which will instantly end the mission successfully. Several optional bonus objectives are also available to be completed. Completing optional objectives usually gives the player a tactical advantage in order to complete the main objectives or provides reinforcements or supplies upon completion. All campaign missions can separately be given a difficulty rating on the "theater" screen before they are started; the available difficulty settings range from "Easy" to "Normal" to "Hard". As the player progresses through one of the campaigns, new entries in the game's "Intelligence Database" become unlocked, providing the player with additional background information on the storyline, the factions, as well as their units and structures. Several of these database entries require the player to complete the bonus objectives of the various missions before they can be accessed. When a player completes a mission, they are awarded a medal on the campaign screen, which progresses to gold if completed on the hardest difficulty. Two extra ribbon decorations are also attained on the medal if the player completes the bonus objectives and finds the intelligence. All cutscenes which the player has unlocked by progressing through the campaigns are made available for viewing at any time within the game's menu.

The skirmish mode in Tiberium Wars is essentially the game's arena or sandbox mode, where the player chooses teams and factions to battle against until the enemy's base is destroyed. Numerous AI settings embody a type – or a combination of types – of classic RTS strategies, such as "turtler", "rusher" and "steamroller". These behavioral settings can additionally be given a difficulty rating ranging from "Easy" to "Medium" to "Hard" to "Brutal", along with "handicap" settings that can be applied to either the AI, the player, or both. Whenever a skirmish mission is successfully completed, a star is placed next to the map in the skirmish menu, showing that the player has won the skirmish on a certain difficulty level.