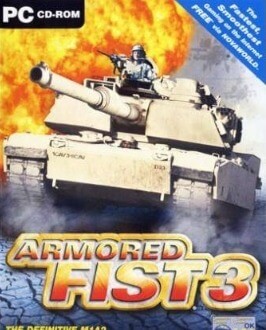 Armored Fist 3 is a tank simulation video game developed and published by NovaLogic, released on October 12, 1999.

It uses voxels, volumetric pixels, for in-game graphics, much like other Novalogic games such as Delta Force and the Comanche series of games. The game contains over 50 interlocking missions, and an in-game mission editor tool that allows players to create missions and share them over the internet.

The game received mixed reviews. GameSpot gave the game a 5.6/10, stating "As a single-player game, it's outdated, and as a multiplayer game, it lacks the variety to provide long-term enjoyment." Additionally, GameSpot, along with CNN Tech, felt the game did too little to improve or change gameplay from Armored Fist 2. IGN praised Novalogic for "straddling the difficult line between simulation and action", but criticized the use of voxel graphics.

Allgame was more positive than most reviews, praising the games use of graphics and sounds to create an involving experience, stating "I was amazed at the detail of the 3D environments, the use of color, and the multiple camera angles available. You actually feel like you're in a tank. I like it. As realistic as the graphics are, sound is even better. The hum of the engine, the sound of metal on metal as the missiles load, and the whine of the swinging turret combine for a superb soundtrack. Good graphics can create a good simulation, but good sound completes it."