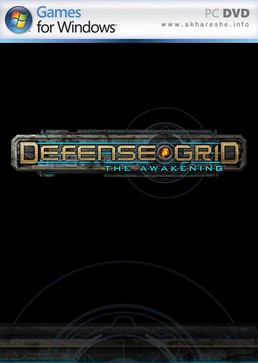 Defense Grid: The Awakening is a tower defense video game developed by Hidden Path Entertainment for Windows and Xbox Live Arcade on the Xbox 360. The game was one of the titles promoted by Microsoft during their Game Developers Conference keynote speech on February 20, 2008. The game was released for Microsoft Windows on December 8, 2008 and for Xbox 360 on September 2, 2009. The OS X version shipped from Virtual Programming on July 7, 2010.

Players must defend military bases from waves of attacking aliens by positioning a range of tower-based weaponry. New levels provided as downloadable content have been developed in the two years since the game's initial release. Reviewers praised the game, with many noting that the quality of the game was high for a budget title.

From July 1 to July 16 of 2013, Microsoft made the game available free to Xbox 360 Gold members. This giveaway was part of Microsoft's "Games With Gold" Program.

The player must defend power cores, which are usually located at a power station, from the invading enemy using ten different tower types. Tower construction is limited to specific platforms. Towers cannot be destroyed by the enemies.

Good tower placement is the key strategic object of the game. Each tower has unique trade-offs that affect ideal placement, such as line-of-sight or ballistic trajectory fire; a large area of effect or damage over time; and minimum and maximum ranges. The "insectoid" enemies arrive in waves and travel along elevated pathways which connect various structures found at the bases. Killing enemies earns resources, which can be used to build more towers and upgrade towers toward two stronger levels. Depending on the tower type an upgrade will provide a more powerful attack, an increased rate of fire and increased range. Tower strength is denoted by the colours green, yellow and red.

Towers may be sold (removed) if resources are needed or a player wants to alter pathways. Resources earn interest with the rate increasing the more resources are obtained. The tower defenses are supplemented by the use of an orbital laser which completely destroys all aliens in its blast zone in one strike. The laser is not available in early missions and takes time to recharge. No resources are earned from enemies destroyed by the orbital laser.

During the game, the player battles fifteen types of enemies, each with unique capabilities and strategies. Some aliens are protected by shields which have to be destroyed first before the alien's health will decrease. The aliens will always take the shortest route and some of the aliens fly, requiring towers with aerial weapons for defense. The invaders are able to carry between one and three power cores. If an alien is killed while carrying a core, the orb will slowly float back to the power station. While returning the power core can be grabbed by an alien which will then head for the exit without reaching the power station. A ticker at the top of the screen advises players of the approaching alien wave's formation.

Players have the ability to speed up a game, along with being able to see weapons' range and aerial aliens path, and can also revert to a previously, automatically saved checkpoint. Defense Grid can be viewed at three different levels of zoom. When a level is successfully completed a set of challenges using the same map become available. Players earn medals depending on how well they complete a level. A Steam leaderboard that provides a comparative ranking of player's game scores and other statistics is available.

The story is based on alien invasion of a planet that has a dormant defense grid. As the player is re-activating the defense system with the assistance of a computer to control the machinery and with only limited resources, the aliens attempt to steal power cores. Power cores are "tiny floating orbs" that provide vital power to the defense grid. Cores are carried by aliens, and when the aliens carrying them die, the cores are dropped, and will slowly float back to their central holder. Once all power cores have been taken from the level, the game is over. Only one power core needs to remain when the last wave of aliens are defeated to complete a level.

Defense Grid is set in the distant future. Most levels feature ancient ruins with defensive military bases built amongst the decaying structures. The game was originally planned to be set amongst an urban environment which has been ravaged by war but that was changed to something more original. The main character in the game, which is called Fletcher, is a computer with human-like qualities that wants to protect his homeworld from destruction.