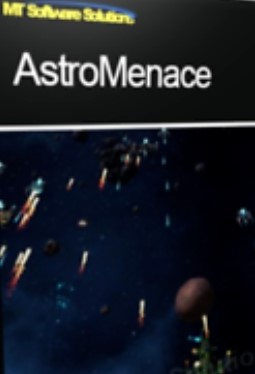 In 2006, Viewizard's developer Mikhail Kurinnoi began beta development of AstroMenace. The Windows version was offered for $14.95 as Shareware early access title, having a free downloadable test version. However, a Linux version was offered as donationware.

After full release in February 2007,Viewizard sold the Windows version directly from their website for $19.95.

In October 2007, version v1.2 of the game's C++ source code was released as free and open-source software under GPLv3. A fork called OpenAstroMenace was started at Sourceforge.net. Some years later, Viewizard moved its own development to this fork by unifying both branches and making it the official version. Ports for other platforms were later developed, with Mac OS X and OpenPandora versions being released. In 2016 the game's content was re-released under an open content CC BY-SA 4.0 Creative Commons license. In April 2018 some artwork with sources (.3ds render files) were released under the GPLv3 in their own repository. Development continues on GitHub (as of April 2019).

The game features 13 levels, within which, money and experience points are earned by destroying enemy aliens, pirates, or meteorites. Using this money, the player can purchase from a selection of 22 ship types, 19 weapons, and 20 ship upgrades.

In December 2007 the UK magazine Linux Format rated AstroMenace with 8/10 credits. In 2008 a Full Circle magazine review named Astromenace among a list of "Top 5 space games". In a 2010 Unixmen.com review, the Linux version was received favourably, with them noting that the game was "graphically unique. The quality of animation along with special effects is stunning ... true eye-candy.". In 2013 Unixmen.com placed Astromenace as number one in their "19 Awesome Open Source Games for Linux" list. Linux For You September 2009 ranked AstroMenace 4/5.