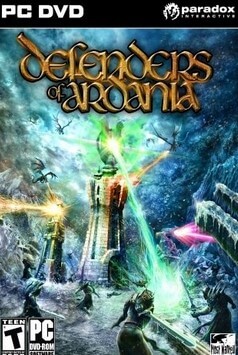 Defenders of Ardania is a hybrid tower defense and real-time strategy video game for Microsoft Windows, iOS, Xbox 360, and PlayStation 3. It was developed by Most Wanted Entertainment and published by Deep Silver and Paradox Interactive. The game was released December 6, 2011 for iOS and on March 14, 2012 on all other platforms. The game's iOS release was well received by some critics and poorly received by others. A subsequent release on the PC, Xbox 360, and PlayStation 3 was significantly less well received.

The game features a campaign mode with eighteen levels, pitting the player, controlling human, elven, and dwarven land and air units against a computer opponent controlling undead units. There is also a multiplayer mode that supports up to four players, either in free for all or two versus two format. In the multiplayer, players can choose from one of three factions to play as; the single player campaign's human faction, an animal-filled faction, or the undead faction.

Defenders of Ardania received a mix of positive and negative reviews for the iOS but mixed to poor reviews on the PC, Xbox 360, and PlayStation 3.

For the iOS, 148Apps gave the game four and a half out of five stars, praising the game's visuals and level of detail, and expressing dissatisfaction only with the game's tutorial. Eric Ford of TouchArcade, another iOS reviewer, gave Defenders of Ardania four out of five stars, praising the visuals as "beautiful" and "gorgeous" and saying that the game "is an excellent addition to the tower defense genre and is a must-try for any fan". Ford did, however, criticize the tutorial, expressing a desire for a tutorial mission rather than instructional screens. Mat Jones of The Average Gamer gave the game a highly negative review, saying that the game was not challenging and that concepts, such as the ability during one level to attack multiple bases and change which one player's units went towards, were never explained. Jones concluded his review by saying that "Defenders of Ardania isn’t a quality product and you probably shouldn’t spend money on it."

Reviews were universally less than positive on other systems. While critics praised the idea of the game, they found fault in the execution. Several critics disliked that the troops spawned by the player simply walk past the troops spawned by the opponent without the two groups fighting. The game's flow also attracted significant criticism, with Peter Eykemans of IGN saying "Even on double speed, the pace is painful. This makes a simple two-person battle turn into a lengthy saga of repeating the same actions over and over again." and Ray Carsillo of Electronic Gaming Monthly complaining of "long drawn out matches on even the easiest difficulty settings as you try to force your way past a virtual stalemate". While the visuals did receive praise, critics felt that they also got in the way of allowing the player to tell what was going on in the game. Opinions about the narrator were mixed. Henry Winchester of PC Gamer praised the voiceover, calling it "a pleasingly booze-obsessed voiceover, delivered by what sounds like a Dalek doing an impression of Sean Connery". Carsillo of Electronic Gaming Monthly was less kind, stating that "your narrator and chief advisor sounds like an awful Sean Connery impersonator and he may be the best of the voice actors you come across". GamesRadar strikes a more neutral tone, stating that "Pre and post-battle dialog is fully voiced by what are only technically 'actors,' but it definitely beats silent text, and does add a bit of flavor to the world." Multiplayer also received mixed reviews. Eykemans of IGN suggested that multiplayer exacerbates the length and flow issues already present in the single player game, while Matt Hughes of GamesRadar calls multiplayer the game's "biggest asset", stating that "Playing against real humans definitely ramps up the intensity and reduces the cheap exploitation found in the campaign.".