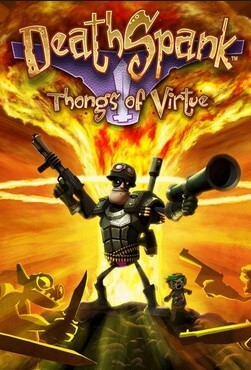 DeathSpank: Thongs of Virtue is an action role-playing game by game designer Ron Gilbert and is the sequel to DeathSpank. It was announced on August 23, 2010. The game adds new environments, modernized weapons, increased boss fights, and a new multiplayer character. Thongs of Virtue was released on September 21, 2010 on the PlayStation 3 via the PlayStation Network and on September 22, 2010 on the Xbox 360 via Xbox Live Arcade. The Microsoft Windows and Mac OS X versions were released November 30, 2010 and December 14, 2010, respectively via Steam.

Critics received the game with generally positive reviews. Initial sales have been strong, with the Xbox 360 version selling nearly 32,000 units and the PlayStation 3 version nearly 39,000 units in 2010. Xbox Live Arcade sales exceeded 54,000 units in 2011. Critics enjoyed the continued humor, visual design and gameplay from the original game, however some critics felt that it was not different enough from the first game.

As with DeathSpank, the gameplay world of DeathSpank: Thongs of Virtue is cylinder-shaped and is rendered without load screens as the player explores its unique goings-on. Gameplay is similar to Diablo, featuring hundreds of pieces of armor and weapons. Advanced dialog options, similar to LucasArts' Monkey Island series, also play a large part in unfolding the game's story.

The game is being designed to be playable in short segments, and has three difficulty levels. It contains from 8 to 12 hours of gameplay depending on choices made during gameplay. In addition to the thirty-three main quests, players have the option of performing a total of 79 side quests. After defeating the final boss, the player can continue to play in the environment, with money in the form of green currency rather than gold coins. Thongs of Virtue includes modern and sci-fi elements, including ranged weapons such as automatic firearms. Extraterrestrial aliens are also introduced as a new enemy.

DeathSpank: Thongs of Virtue was announced August 23, 2010, shortly after the release of its predecessor, DeathSpank. It was first released on September 21, 2010 on the PlayStation 3 via the PlayStation Network and then on September 22, 2010 on the Xbox 360 via Xbox Live Arcade. The Microsoft Windows and Mac OS X versions were released November 30, 2010 and December 14, 2010, respectively via Steam. According to Ron Gilbert, both parts of DeathSpank were developed at the same time, with his equal involvement in both of them. Originally it was meant to be released as one giant game, but it became too big for one downloadable game, so the developers split it into two. Gilbert has said that part two represents "Act II and III" of DeathSpank, and "wraps up the story nicely."