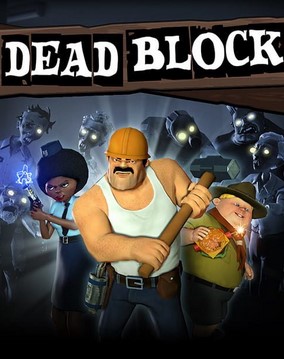 Dead Block is a third-person action-strategy video game by German developer Candygun Games and publisher Digital Reality, in which three survivors of a zombie outbreak attempt to keep zombies out of a safehouse. It was released on the Xbox 360 on July 6, 2011 via Xbox Live Arcade, and on the PlayStation 3 via the PlayStation Network on July 19, 2011 in North America and July 27, 2011 in Europe. A Microsoft Windows release followed on January 26, 2012.

In the game, three characters use a combination of blockades, traps and weapons to fight off attacking zombies. It was developed with the Unreal 3 Engine and received mixed views from critics upon its release, with aggregate scores in the 60% range for the PlayStation 3 and the 50% range for the Xbox 360. Critics gave high marks for the game's music and the game's comedic premise, however critics expressed disappointment in the lack of online multiplayer.

Dead Block is set during the 1950s where a zombie outbreak coincides with the emergence of the rock and roll genre of music during that time period. Three characters are playable: Jack Foster, an adult male construction worker who wield a sledgehammer, Mike Bacon, a brave obese boy scout carrying explosives, and Foxy Jones, a tough African American traffic warden with a handgun. The rise of rock n roll has caused the dead to rise from their graves and return to life as the undead.

The game is primarily a variant on the tower defense game mechanic. Players must build traps and fortify doors and windows to keep a horde of zombies from entering a given building. During gameplay players can also scavenge the building for additional powerups, items and things that can assist in keeping the zombies at bay. The game can be played locally with four players in a splitscreen format, and includes ten single player levels along with an additional eight multiplayer co-op levels.

Dead Block was first announced on May 5, 2011. It is powered by Epic Games' Unreal Engine 3. It was released July 6, 2011 for the Xbox 360 via Xbox Live Arcade, and on July 19, 2011 in North America and July 27, 2011 in Europe for the PlayStation 3 via the PlayStation Network. A release for Microsoft Windows followed on January 26, 2012. A downloadable content pack entitled the More Dead to Block Map Pack was released on August 17, 2011. It features four new locations including a Motel, a Turkish Bath, an Office Building, and a Slaughterhouse.

Andreas Hackel, art director at Candygun Games described the inspiration for the game's visuals. "I was inspired by games like Team Fortress 2 and classic B-movies of the 1950's", stated Hackel. When asked about the reason for choosing to set it in the 1950s, Hackel replied, "not many games are set in this period and there are a whole slew of very typical and interesting design elements from this time period. Elements like the cars, milk bars, chrome, juke boxes, fashion and hairstyles are all instantly recognisable as coming from the 50's." Hackel commented that Candygun wanted the characters to be "people from the street", and not superheroes. Roger Joswig explained their choice of using Unreal Engine 3 instead of a proprietary technology. "If you're looking to release your game on PlayStation , Xbox 360 and PC as we were, developing your own engine is a lot more expensive, takes a long time if you start from scratch and needs a lot of QA support – so it wasn't really a feasible option for us as a small, start-up developer". He also noted that the engine is built to run on the PlayStation 3, Xbox 360 and Microsoft Windows natively and that the team was familiar with the Unreal Engine tools. The in-game music was provided by the band Vampire State Building. The narrator's voice and in-game sound effects were outsourced to Periscope Studios.

Dead Block was met with mixed to negative reviews from critics. Aggregating websites GameRankings and Metacritic gave the PlayStation 3 version 60.71% and 63/100 and the Xbox 360 version 49.63% and 50/100. Metacritic reported a wide range in scores, with the lowest score of a 20% approval given by Nick Hartel of Video Game Talk to an 83% approval from ZT Game Domain's Michael Futter. As of year end 2011 the Xbox 360 version sold 35,625 copies. A sales analysis of PlayStation Network titles sold in August 2011 showed that Dead Block moved 7,778 units in the first month of its release on the service.