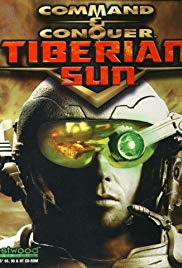 Command & Conquer: Tiberian Sun is a real-time strategy video game developed by Westwood Studios and released in 1999. The main storyline follows the second major war between the Global Defense Initiative (GDI) of the United Nations, and the global terrorist organization known as the Brotherhood of Nod. The story takes place 30 years after the GDI had won the First Tiberium War in Command & Conquer.

As of February 12, 2010, Electronic Arts licensed Tiberian Sun and its expansion pack Firestorm as freeware.

Set in 2030, the plot of Tiberian Sun is a follow-up to the original game Command & Conquer, after the end of which the Nod leader Kane is presumed dead. In Tiberian Sun, Kane resurfaces from his hideout with improved military forces and new Tiberium-enhanced technologies, determined to convert Earth into a Tiberium world. The GDI commander Michael McNeil is tasked with preventing the world from falling into the hands of Nod, this time with the very means of the extraterrestrial Tiberium substance. Meanwhile, Nod general Anton Slavik must unite a splintered Brotherhood of Nod before joining Kane's fight against GDI. A third faction, The Forgotten, are caught in the middle of this fight and join either side, sometimes as playable and sometimes as non-playable characters.

The game consists of two campaigns following the outcome of Kane dying and Nod destroying the Philadelphia space station.

The gameplay has similar principles to Tiberian Dawn but with newer and upgraded units and structures plus three new types of Tiberium that can be harvested. Tiberian Sun relies heavily on science fiction technologies, and introduces a new isometric game engine featuring varying level terrain to give the impression of a true 3D environment. Dynamic lighting allows for day/night cycles and special effects, such as ion storms. Maps feature cityscapes where units could hide or battle in urban combat. Some buildings and armored units are rendered with voxels, although infantry is still rendered as sprites.

During the campaign, different routes can be chosen, some of which can lead to optional missions that may affect the difficulty of the main mission, or supply the player with additional units and technologies. Tiberian Sun is the last game of the series to offer the split-route feature.

Tiberian Sun features a futuristic and ambient soundtrack by Jarrid Mendelson and Frank Klepacki, who composed the signature themes for the movie sequences, as well as the game's musical score with the intention to differ from the original Command & Conquer in order to capture the mood for each mission.

Tiberian Sun was announced after the release of the original Command & Conquer, with a trailer featured on its discs. After Virgin Interactive Entertainment was facing financial difficulties and was selling some of its assets, Electronic Arts acquired Westwood Studios in 1998 and published Tiberian Sun, and had no direct part in its development. Tiberian Sun's development was troubled before and after the acquisition, and was delayed numerous times - first for November 1998, then for spring 1999, then ultimately summer 1999. This resulted in a number of engine and gameplay features being omitted from the game, some of which were later included in Firestorm expansion pack, as well as numerous bugs which have not been fixed even after the patching period.

Several images and references in the Tiberian Sun "rules" file indicate that more features were planned for the release. A former Westwood employee, Adam Isgreen, who was working for Petroglyph Games at the time, elaborated upon them in March and May 2007. Drop-pods were intended to be customizable for GDI before deployment. Lighting was intended to make a huge difference for day/night play, as units spotted by light posts/towers would be susceptible to enemy fire at greater ranges, and in turn would suffer a reduction in their own range ability. Westwood planned the Hunter/Seeker Droid option to support selection of target types, but ultimately the droid was made to attack at random. Developers also didn't have enough time to finalize balanced differences in terrain types.

While art direction and balancing worked out according to plan, during development many other problems occurred. For example, the dynamic battlefield with terrain alteration and forest fires was very ambitious, but had to be reduced as it led to unsolvable path finding problems. Also a "loadout" screen was to be implemented, allowing commanders to pick units to take into battle before missions. The idea did not fit into the final project, so it was cut although fully developed. Other unpolished ideas were kept in leading to a lot of feature creep. The game also had planning troubles in post production. Storage and network requirements for the digitized video didn't meet the demands. The studio was working with professional actors for the first time. Recording started early when plot lines where not fully developed, but also not subject to change as re-recording would be too expensive and interfere with localisation schedules. The game engine's shift to make it look more 3D and destructible bridges took over ten times longer to program as originally estimated. Adding repairable bridges that can also be passed underneath complicated systems such as path-finding, Z-buffering, rendering, unit behavior, and AI. The bridges became a core element that was used excessively in map design.