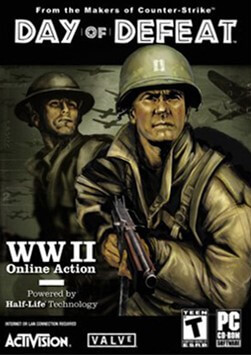 Day of Defeat is a team-based multiplayer first-person shooter video game set in the European theatre of World War II on the Western front. Originally a modification of the 1998 game Half-Life, the rights of the modification were purchased by Valve Corporation and released as a full retail title in 2003.

Set in the midst of World War II, Day of Defeat includes no single-player campaign, with focus left only on the game's multiplayer aspects. The game favors teamwork and features objective-based gameplay in combination with its system of classes. Maps are primarily made up of narrow paths, all of which typically lead to a few key locations. An official remake of the game, Day of Defeat: Source, was released by Valve in 2005. Utilizing the then-new Source engine, the remake featured various improvements over its predecessor, including updates to gameplay, graphics, and audio functionality.

Day of Defeat is a multiplayer first-person shooter that simulates squad-level infantry combat between the adversaries of World War II's European Theatre; the Allies and the Axis powers. Players can choose to join either the Allied or Axis armies, with the Allies include the United States or Great Britain and the Axis include Germany.

A round begins with two opposing teams starting simultaneously in their respective spawn area of a map, both acting towards the goal of achieving their respective objectives whilst preventing the enemy team from accomplishing theirs. A round ends when one team accomplishes all of its objectives, with that team claiming victory. Eventually, the game with the expiration of a set time limit, and the team with the most objectives achieved is the winning team regardless of kills or casualties, except in the case of both teams having not achieved any objectives or having achieved the same number of objectives.

Weaponry in the game attempts to realistically portray those that would be found in World War II, and the gameplay reflects this aesthetic choice. Recoil can be heavy and the game doesn't allow the player to fire while running or jumping. The game also features a stamina bar, preventing the player from sprinting for long periods of time and forcing them to actively conserve energy.

Day of Defeat's initial retail offering included fifteen maps, each depicting different scenarios with variation in size and thematic locations. These often drew inspiration from historical World War II battles, such as the battle at Omaha Beach and street-fighting in the Italian city of Salerno during Operation Avalanche. The game also features a Glider mission wherein the American 101st Airborne lands in a WACO Glider and destroys such objectives as a radio antenna and Flak 88 mm gun anti-aircraft gun.

Weapons in the game are also of historical significance, with much of the weaponry being accurate representations of those used in World War II. The weapon selection is also realistic in its usage, with recoil and accuracy representative of the gun's real-life counterparts.

Day of Defeat began as a third-party Half-Life modification in 2000. In the initial release of the modification, each class' movement was unique. This differential, however, was removed with the release of Beta 2.0 in October 2001. Beta 2.0 also introduced new weapons and reduced player accuracy while moving, which caused significant changes to the gameplay. In July 2002, Beta 3.0 was released with a new class, the Allied Sergeant, and a new game mode in which players would only respawn upon the beginning of a new round.

While the first versions of Day of Defeat were distributed over the internet at no cost, the rights to the game were later purchased by Valve and the modding team hired. Valve then produced a stand-alone retail version of the game, published by Activision and released in May 2003. The retail version included a number of changes from the modification, including improved graphics and fifteen maps, ten of which were completely new. Friendly-fire, which was previously enabled by default, was disabled in the retail version, bleeding - losing small amounts of health over time caused by injuries which "bled" - was removed, and a mini-map was added to more easily facilitate navigation and cooperation between fellow team members. UI improvements, including identifiers for differentiating team members from enemies and help messages that acted as a tutorial for new players, were also introduced in the retail release.