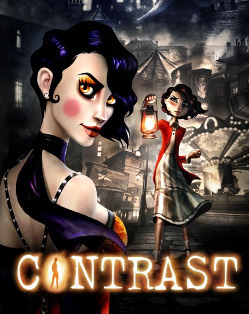 The game is set in a noir atmosphere aesthetically inspired by Belle Epoque and Art Nouveau. The player must solve puzzles that require movement between the physical world, which is represented as 3D, and shadows, which are represented as 2D. The player may sometimes manipulate different light sources in the 3D world (spotlights, film projectors, etc.) to create the shadow paths that reach into new areas; "collectibles", available through game-play, offer insight into the game's characters and the world in which they live. The goal of the game is exploration and discovery through problem solving.

Dawn and Didi are the two characters who appear as full 3D figures. The player controls Dawn, an imaginary friend, who is able to manifest as a three-dimensional shadow. Dawn is able to jump between two shadows, no matter how far apart they are. All other characters appear as shadows against the visual walls, but they still interact with the world as though they are "real."

The game's story is broken up into three acts. The player character is an elegant and slender female acrobat, Dawn, who has the ability to leap into shadows. Dawn's companion is a little girl named Didi, with whom Dawn has a mysterious past. The two work together to help put back together her complicated family; Didi's mother, a jazz singer, and her father, whose multiple plans have gotten him into trouble with the Mafia. Adding in is a mysterious magician who may have a relation to both Didi and Dawn as the two work together to figure out the truth through the shadows.

Contrast received mixed reviews upon its release. On Metacritic, the Xbox 360 version of the game got a score of 65/100, the PC computer version a 62/100, and the PlayStation 4 version a 59/100. On GameRankings, the game has a rating of 63%. Dan Stapleton of IGN gave the game a 7.5, praising the gameplay and the puzzles. He said, "Contrast is a game full of heart, beauty, and at least a few excellent puzzles." Carolyn Petit of GameSpot gave the game a score of 5.0, complimenting the atmosphere of the game but criticizing the gameplay and the puzzles. VentureBeat's McKinley Noble gave Contrast a 55 out of 100 score, stating that while he liked the overall concept, it suffered from overly "glitchy" gameplay and "lifeless" environments.