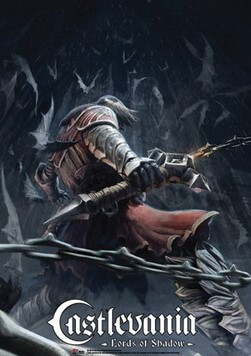 Castlevania: Lords of Shadowa is an action-adventure video game developed by MercurySteam and Kojima Productions, published by Konami and released on October 5, 2010 for the PlayStation 3 and Xbox 360. The PC version was released on August 27, 2013. The game is a reboot of the Castlevania series. Set in Southern Europe during the Middle Ages, the story focuses on Gabriel Belmont and his quest to defeat a malevolent order known as the Lords of Shadow and resurrect his wife. The player controls Gabriel in 3D environments as he uses melee skills to defeat enemies and solves puzzles to move through the game.

The game was originally announced as Lords of Shadow with no connection to the Castlevania series mentioned. This was done to keep their plans to radically change the direction of the Castlevania mythos a secret and to prevent the announcement of the game from upstaging another series release, Castlevania Judgment. Hideo Kojima, creator of the Metal Gear series, helped produce the title. The music was composed by Spanish composer Óscar Araujo, who was acclaimed for his work on the game.

Lords of Shadow is a third-person action-adventure game in which the player controls the main character, Gabriel Belmont. The combat involves a retractable chain whip called the Combat Cross. The player can perform up to forty unlockable combos with it. The commands consist of direct attacks for dealing damage to single enemies, and weak area attacks when surrounded by them. It is also capable of interactions with secondary weapons, such as knives, holy water and other items which can be upgraded. In addition, the Combat Cross's melee skills can be combined with the Light and Shadow magic system, which are spells aimed at defense and aggression, respectively. The whip is upgradeable and can also be used to guard against an opponent's attack.

The developers attempted to reach out to new audiences by distancing Lords of Shadow from previous Castlevania games, but kept some elements intact to not alienate franchise fans. For example, vampires and werewolves are recurring enemies in the game, but other existing enemies include trolls, giant spiders and goblin-like creatures. The enemies can be defeated for experience points, which can be used to purchase combos or to augment the player's abilities further. Lords of Shadow has large-scale bosses known as titans. The Combat Cross can be used to grapple onto their bodies and navigate them, and break the runes that animate the titan.

Similar to the original Castlevania titles, platforming and puzzles are a key component and are featured in fifty levels. The player can control Gabriel to jump most distances, dash or hold his balance above fatal pits. The Combat Cross can be used for exploration purposes like scaling walls, rappelling and swinging across gaps. Some sequences of the game require the player to solve physical puzzles or brain teasers. Alternatively, moving certain objects can set off chain reactions and open paths to new areas. Activating switches can also assist against traps. The player can explore the levels in order to find hidden items, which can increase health or magic abilities. These items are "gems"; there are three types, including life gems, light gems and dark gems. These can increase life endurance, light magical ability and dark magical ability, respectively.

Producer David Cox stated the game is a reboot of the franchise. The setting of Lords of Shadow is during "the end of days" in the year 1047. The Earth's alliance with the Heavens has been threatened by a malevolent force known as the Lords of Shadow. A dark spell has stopped the souls of the deceased from leaving, while evil creatures inhabit the dying land and attack living people.

The main character, Gabriel Belmont (voiced by Robert Carlyle), is a member of the Brotherhood of Light, an elite group of holy knights who protect and defend innocent people against the supernatural creatures. Gabriel's wife Marie (Natascha McElhone) was brutally murdered by one of them, and her soul cannot leave as it is trapped in limbo. Because she is now neither alive nor dead, she realizes what is at stake and guides Gabriel to his destiny to save the world as he investigates the dark spell. He travels the destroyed land, meeting other characters, such as the oldest living member of his order, Zobek (Patrick Stewart, who additionally narrates the game). Two masks referred to as the God and Devil Masks lie at the center of the plot, with the God Mask having powers to resurrect the dead. Gabriel intends to defeat the three factions of the Lords of Shadow in order to obtain the pieces of the God Mask and bring back his deceased wife.

Gabriel is sent by the Brotherhood of Light to the Lake of Oblivion, where his deceased wife, Marie, tells him that Spirits who founded the Brotherhood said that the Lords of Shadow's power will save the world. Gabriel meets a man from the Brotherhood called Zobek, who states that a prophecy has been kept a secret by a select few, which tells of a pure-hearted warrior who will claim the Lords of Shadow's power to overcome evil. Zobek says that he and Gabriel must enter the lands of the Dark Lords in order to unite the Heavens with the world again, and that with this Gabriel can bring Marie back from the dead. Gabriel defeats the werewolf Cornell (Richard Ridings) and the vampire Carmilla (Sally Knyvette) for the first two pieces of the God Mask on his journey, while learning that they were once two of the three founding members of the Order who fought the spawns of Satan in God's favor until they transformed into the Spirits, with power only second to God's. After they ascended to the Heavens, they left behind their dark sides, who were known as the Lords of Shadow.