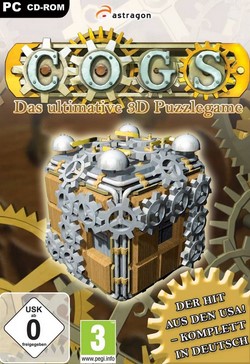 
Cogs is a puzzle video game released in 2009 by Lazy 8 Studios, originally released as a Microsoft Windows title, but receiving subsequent ports to other operating systems, mobile platforms, and game consoles. The game requires the player to manipulate a three-dimensional object's sides as sliding block puzzles as to complete specific goals, such as meshing gears to complete a clockwork mechanism or routing gas flow through pipes to a balloon.

Cogs is built on a number of puzzles that mimic sliding block puzzles. Each level, representing some three-dimensional object, has various objectives, but generally involve moving tiles to connect sets of gears, piping, and other physical elements to make that object behave in a specific manner, such as providing gear power to turn wheels. As objects are three dimensional, the player may need to manipulate puzzles on multiple faces or faces that wrap around the object, or consider the front and back-sides of tiles. The player is free to rotate the virtual object to identify how to arrange the tiles correctly.

The basic physical elements that the player may need to manipulate include: gears which can turn other gears it is meshed with as well as transmission gears of different sizes that affect the rate of rotation of subsequent gears; pipes which carry (coloured) steam or gas, which may be necessary to drive motors for the gears or fill balloons; and bell strikers, which must be set at the right time to make a specific melody for the puzzle. Early puzzles features one type of mechanic, but later puzzles may include many of these spread on multiple faces.

Each puzzle also features a special challenge mode to finish the puzzle within a few seconds or with a limited number of moves; completing these earns additional stars for the player.