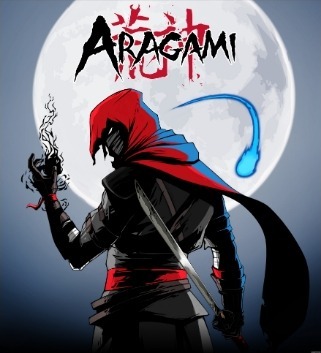 
Aragami (荒神) is an action-adventure stealth video game developed and published by Lince Works for Linux, Microsoft Windows, OS X, PlayStation 4, and Nintendo Switch. The game was originally titled Twin Souls: The Path of Shadows. The players take the role of Aragami, an assassin with supernatural abilities. The player can teleport between shadows and faces an enemy army that goes by the name of 'Kaiho'. This opposing army is formed by mystical warriors with the power to control the light.

The player controls a shadow spirit, Aragami, attempting to reach the end of all thirteen open-world chapters in order. To complete a chapter, the player must go to certain areas to collect items or destroy obstacles and reach the level's exit. Aragami can teleport to any part of the map in a certain radius where a shadow is cast, but doing so expends "Shadow Essence", displayed as a meter on his cape. Shadow Essence is replenished by standing in the shadows, and drained by standing near intense light sources such as lanterns. Later in the game, the player gains a raven that will show the player the location of objectives through walls, and a set of bells that can be rung to lure enemies elsewhere.

Each chapter is patrolled by many guards. Basic sword-wielding guards are the most common enemy, and can throw light projectiles to kill the player. There are also archers that patrol elevated areas and can spot the player at a longer distance while aiming, and swordsmen circled by a torch that kills the player on contact. A guard can be killed instantly by attacking him within a certain range, but the only enemy that must be killed to complete a chapter is the boss (if present). Observing evidence of the player's presence (such as the sound of their comrades dying or spotting the player in the distance) will make guards suspicious, causing them to draw their swords and investigate. If they find a corpse or see the player clearly, they will blow a horn, temporarily making all the guards actively search for Aragami, and causing them to become more suspicious if the player evades detection. Any successful hit by a guard will kill Aragami instantly, returning the player to the last checkpoint to try again. The player can also die by falling into water.

As the player explores the levels, they may find several hidden scrolls. Scrolls can be spent to unlock various useful skills, such as the ability to become temporarily invisible or to make corpses vanish. "Abilities" either rely upon Aragami's Shadow Essence or have infinite uses. "Techniques" are more powerful, but have only two uses, cannot harm bosses, and can only be equipped one at a time (though the player can switch among them at any time). Shrines placed sparsely throughout the level will refill all of the player's equipped techniques.

Aragami is summoned into existence one night by an astral projection of Yamiko, a girl who identifies herself as a captive of the Kaiho, an army of light adepts. She describes them as oppressors who conquered the land from the shadow aligned Nisshoku, led by the Shadow Empress. She claims that after winning the war, they imprisoned the Empress and her retainers in the Nisshoku's main temple, including Yamiko. She requests Aragami's help in freeing them, for which she needs six talismans to unlock the prison. This must be done before the night's end, for Aragami will dissolve if sunlight touches him.

As Aragami retrieves the talismans, they trigger strange memories in him. He sees Yamiko's former life as an orphan hiding out in the mountains, and of her being trained alongside the Nisshoku guild's leader and the Shadow Empress's advisor, Hyo. He also witnesses memories of another person who wielded light, concluding that they are the memories of the enemy general he was summoned to kill. They find Hyo's sword fashioned as a grave marker, confirming his death. Yamiko becomes upset and swears vengeance, and Aragami promises to help her attain it.