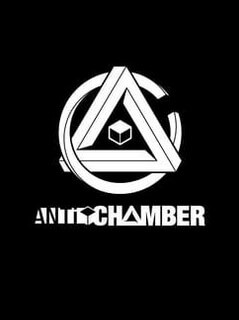 Antichamber is a first-person puzzle-platform game created by Australian developer Alexander "Demruth" Bruce. Many of the puzzles are based on phenomena that occur within impossible objects created by the game engine, such as passages that lead the player to different locations depending on which way they face, and structures that seem otherwise impossible within normal three-dimensional space. The game includes elements of psychological exploration through brief messages of advice to help the player figure out solutions to the puzzles as well as adages for real life. The game was released on Steam for Microsoft Windows on January 31, 2013, a version sold with the Humble Indie Bundle 11 in February 2014 added support for Linux and OS X.

In Antichamber, the player controls the unnamed protagonist from a first-person perspective as they wander through levels. Regarding typical notions of Euclidean space, Bruce has stated that "breaking down all those expectations and then remaking them is essentially the core mechanic of the game".

The player starts in an antechamber that contains four walls. One is a diegetic menu to set the various game options as well as a countdown timer starting at ninety minutes. A second wall provides a map of the game's space that will fill in as the player visits specific rooms, highlighting passages the player has yet to explore, and allows the player, upon return to this room, to jump to any room they've visited before. A third wall shows a series of cartoonish iconographs and obfuscated hint text that are added as the player finds these on walls of the puzzle space. The fourth wall is a window, showing the ultimate goal, the exit from the space, which the player must figure out how to get to.

Puzzle elements in various chambers involve maneuvering themselves around the spaces, where level elements can change after passing certain points, or even based on which direction the player is facing when traversing the level. Laser beams are used as mechanisms to control various doors; these may either require the beams to be blocked or unblocked, and many doors require multiple beams to be in their proper state to open. Initially, the player can trigger these themselves. Later, the player gains access to a series of colored "guns", each which helps the player access more of the space. Initially, the gun can pick up any number of small cubes, storing them, and then place them on surfaces; these can be used to block the aforementioned laser beams, or used as platforms for the player to get over obstacles.

Other guns can be used to "grow" new blocks by placing blocks out in specific patterns, to direct a connected series of blocks towards an objective point, and to mass create and fill an area with blocks; later guns retain the abilities of the earlier ones. Certain areas in the space are dead zones that remove any blocks stored in the gun or prevent blocks from moving through them. After most puzzles are signs with the forementioned iconographs which can be activated to give a hint about the just-completed puzzle. At any point, the player can jump back to the first room, and use the map to navigate to other areas; this resets any progress made on specific puzzles though the player retains the guns they have obtained.

Upon completing a core set of puzzles, the player can then access the exit door, upon which they start to chase down a black cloudlike shape, using all the solving techniques they have learned before. Eventually they are able to capture the cloud as a black cube within their gun, and enter a final, more expansive area, where they return the shape to a waiting shell. The shell creates a structure around it – similar to the game's logo – and then sucks everything around it into its center, sending the screen to black and ending the game.

Antichamber started as early as 2006 as Bruce's idea for an arena combat game based on expanding the mechanics of the game Snake into a multiplayer experience. Full development of the game, initially called Hazard, did not start until 2009 and continued into 2010. Bruce developed the game using UnrealScript with the Unreal Engine 3. As Bruce iterated through its design, he dropped the combat portion and chose to focus more on a single-player puzzle game along with the psychology of the puzzles, eventually adding the subtitle "The Journey of Life" in 2009. Part of this change came about how he was able to create Impossible

Object spaces within the Unreal Engine, which came about as a result of a "rookie error" in coding. Bruce recognized that there was a single-player game behind creating spaces and puzzles where the player would have to work out how the rules work, and expanded the game in that direction. Bruce said in a 2011 interview with Kotaku that "the game started off as being all about geometry...I needed to find a way to represent that non-physical geometry to players...so I needed to work out why we would need this non-physical geometry in the world and it took me a couple years but after combining geometry and space and perception, I realized that the real reason that this game is interesting and is working is because it's about psychology." As he worked out puzzles, he found that injecting philosophical ideas helped to lead to puzzle designs or otherwise augment established puzzles, and made that part of Antichamber's approach. The game's simple art style was partially to distinguish the game from other Unreal Engine games, while also to aid in masking the work behind the inverse lighting system used in the game.

On April 2, 2012, Antichamber became the seventh game to receive funding from the Indie Fund with Bruce citing the award as "finishing funds" to ensure the game can be released in 2012, and was ultimately released in January 2013.