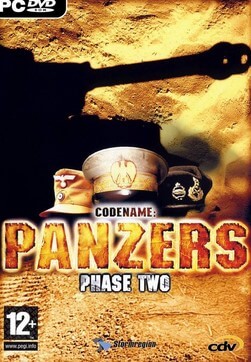 Codename: Panzers is a World War II video game created by Hungarian game developer StormRegion. It launched in 2004 to generally favorable reviews. The series entered its second iteration in July 2005 with Codename: Panzers Phase II. A Codename: Panzers Phase III was originally planned, but no longer appears on the official website. It was followed by Codename: Panzers – Cold War. The first two games of the series don't work on 64-bit operating systems due to driver incompatibility of StarForce Protection, however the DRM-free versions available on GOG.com does not contain this issue. But the GOG version relies on VC Redist 2015, which has persistent issues on many computers. Codename: Panzers was intended to be a three-part series portrayal of various conflicts of the Second World War.

The current publishing rights of the franchise belong to THQ Nordic after they acquired the intellectual property rights from the defunct publisher, cdv Software Entertainment.

Like Soldiers: Heroes of World War II and, to a lesser extent, Blitzkrieg, Codename: Panzers focuses on managing groups of troops, tanks, armored vehicles, and artillery and destroying the enemy or capturing objectives. The game abstracts concepts such as supply, repair, and air support without doing away with them entirely, and belongs to the real-time tactics genre more than the traditional wargame/simulation genre.

Units gain experience throughout the single-player campaigns and can be bought/upgraded between missions and added to the player's personal 'army' that travels with him from scenario to scenario. Completing mission requirements and optional objectives gives the player 'Prestige' points, which can be accumulated to upgrade existing units or used to add new units to the player's core force. Additionally, many missions provide the player with extra units to complement their core army. Also, the player is most often responsible for keeping alive a single 'hero' unit.

Units include a variety of infantry, armor, and artillery used by each nations' armed forces in World War II. While the main focus of the game is in controlling tanks, artillery units provide long range fire while infantry units can be used to engage other infantry and garrison buildings for added defense. Damage is modeled on a health bar system, although vehicles have additional armor plating to weaken before taking damage. Players are also required to maintain their vehicles using ammo and repair trucks. In addition to regular units the player can control, the game provides players with indirect fire support. In missions, players can direct a limited number of precision dive bomber strikes, paratrooper drops, carpet bombing runs, reconnaissance planes and off-map artillery.

The first game (Phase I) focused on three campaigns: German (led by Hans Von Gröbel), Soviet (led by Aleksander Efremovich Vladimirov), and Western Allied (led by Jeffrey S. "The Buck" Wilson and James "The Gent" Barnes). The German campaign begins with the Blitzkrieg of Poland, France and then the invasion of the USSR, with the final campaign mission at Stalingrad. The Soviet campaign begins with the turn at Stalingrad and ends with the Battle of Berlin and the capture of the Reichstag. The Western Allied campaign begins with Operation Overlord and the Normandy landings, and includes battles such as Operation Market Garden and the Battle of the Bulge. The game features realistic representations of tanks, artillery units, air forces, and infantry from Germany, the United States, the Soviet Union, Britain, France and Poland. It also features Yugoslav partisans fought in the German campaign when the player moves through a rebellious area of Nedić's Serbia.

The second game (Phase II) focused on three campaigns: Axis (the same leader as in the first game with Dario DeAngelis, the Italian leader), Western Allied (the same leader as in the first game), and Yugoslavian Partisans (led by Farvan "Vuk" Pondurovik, sometimes misspelled as Fervan). The Axis campaign follows the Italian Dario de Angelis and the Afrika Corps through the North African Campaign to the First Battle of El Alamein. The Western Allied campaign begins at the Second Battle of El Alamein, and includes Operation Torch, the Battle for Tobruk, and the Battle of the Kasserine Pass, then finishes with the Allied campaign in Italy, including Anzio and the Battle of Monte Cassino. The Yugoslav partisan campaign focus on combat in the Balkans with Soviet assistance.