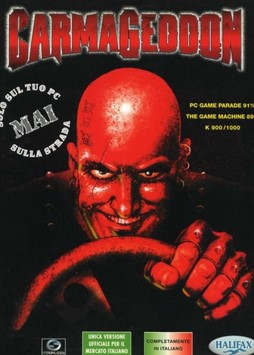 Carmageddon is a vehicular combat video game released for personal computers in 1997. It was later ported to other platforms, and spawned a series of follow-up titles. The game was produced by Stainless Games and published by Interplay Productions and Sales Curve Interactive.

In 2011, Stainless Games obtained the rights to Carmageddon from former company Square Enix Europe. In June 2012, it was announced that a new port of the game would be released for iOS and certain Android mobile devices. The game was released as both a free demo and paid game in 2013.

In December 2018, THQ Nordic acquired the rights to the Carmageddon series from Stainless Games.

In Carmageddon, the player races a vehicle against a number of other computer controlled competitors in various settings, including city, mine and industrial areas. The player has a certain amount of time to complete each race, but more time may be gained by collecting bonuses, damaging the competitors' cars, or by running over pedestrians.

Races are completed by either completing the course as one would a normal racing game, "wasting" (wrecking) all other race cars, or killing all pedestrians on the level. The game includes thirty six race tracks, played across eleven different maps.

The game featured instrumental versions of songs from Fear Factory's album from 1995, Demanufacture, with the song "Zero Signal" being used in the game's intro. Other songs from the album that appear are "Demanufacture" and "Body Hammer".

The game that became Carmageddon started out as "3D Destruction Derby", a banger racing sim prototyped by Stainless Software. This was signed by SCi in 1995, but under the condition that it be made into a licensed game in order to guarantee popularity. Initially, SCi wanted to use the Mad Max license, but they were unable to find out who owned the rights to the franchise. They instead secured the Death Race 2000 license, as a sequel to the original film was at that time planned.

According to head programmer Patrick Buckland, the initial concept stemmed from the team getting bored while playing racing games, leading them to ultimately drive in the wrong direction and crash into other cars. They decided it made sense to create a game where this was the objective to begin with. Shortly after, Psygnosis released a game with this same concept, Destruction Derby.

The sequel to Death Race 2000 was later cancelled, but by this point SCi were impressed enough by Stainless's work on the game that they felt they could try creating their own IP. The name Carmageddon was coined, and development proceeded with the designers allowed unusually free rein with regard to the content of the game.

The game uses the BRender engine, which Stainless Software were already thoroughly familiar with; one of their previous contracts was to port BRender to Macintosh and build the corresponding tools and demos. The PlayStation conversion was subcontracted to developer in the United States, Elite, with the plan to release the PC and PlayStation versions simultaneously. Buckland anticipated that Elite would have problems with the conversion due to Carmageddon's open environments.

A port was in development for the Gizmondo, but was never released due to the system's demise. Carmageddon was released for iOS in October 2012, and for Android devices in May 2013.

All games from the serie "Carmageddon"