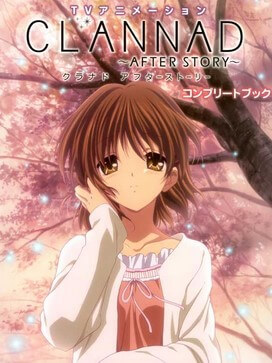 Clannad (クラナド Kuranado) is a Japanese visual novel developed by Key and released on April 28, 2004 for Windows PCs. While both of Key's first two previous works, Kanon and Air, had been released first as adult games and then censored for the younger market, Clannad was released with a rating for all ages. It was later ported to the PlayStation 2, PlayStation Portable, Xbox 360, PlayStation 3, PlayStation Vita, PlayStation 4 and Nintendo Switch consoles. An English version for Windows was released on Steam by Sekai Project in 2015. The story follows the life of Tomoya Okazaki, an average high school student who meets many people in his last year at school, including five girls, and helps resolve their individual problems.

The gameplay of Clannad follows a branching plot line which offers pre-determined scenarios with courses of interaction, and focuses on the appeal of the five female main characters by the player character. The game was ranked as the best-selling PC game sold in Japan for the time of its release, and charted in the national top 50 several more times afterwards. Key went on to produce an adult spin-off titled Tomoyo After: It's a Wonderful Life in November 2005, which expanded on the scenario of Tomoyo Sakagami, one of the five heroines from Clannad.

Clannad has made several transitions to other media. There have been four manga adaptations published by ASCII Media Works, Flex Comix, Fujimi Shobo and Jive. Comic anthologies, light novels and art books have also been published, as have audio dramas and several albums of music. An animated film by Toei Animation was released in September 2007, followed by two anime series including two original video animation (OVA) episodes by Kyoto Animation produced between 2007 and 2009. Both anime series and their accompanying OVAs are licensed by Sentai Filmworks and were released in North America in 2009. The animated adaptations have received high sales figures in Japan as well as critical acclaim abroad.

Clannad is a drama and romance visual novel in which the player assumes the role of Tomoya Okazaki. Much of its gameplay is spent on reading the story's narrative and dialogue. Clannad follows a branching plot line with multiple endings; depending on the decisions that the player makes during the game, the plot will progress in a specific direction.

There are six main plot lines that the player will have the chance to experience, five which are initially available. Throughout gameplay, the player is given multiple options to choose from, and text progression pauses at these points until a choice is made. To view all plot lines in their entirety, the player must replay the game multiple times and make different choices to change the plot progression.

When first playing the game, the scenarios for all five heroines and additional smaller scenarios are available in what is called the School Life story arc. When the player completes a character's scenario, he or she receives an orb of light. When eight of these lights are obtained, the game's second story arc, called After Story, is made available. One of the lights disappears during School Life, but reappears in After Story. To view the true ending of Clannad, all 13 lights must be obtained. Originally, the lights were meant to be items that players could use in the game, but since this increased the game's complexity, and detracted from the storyline, the function of the lights was simplified and made less intrusive.

The first half of the story takes place primarily at Hikarizaka Private High School, a fictional school located in Japan. Outside of the school, frequented locations include the bakery run by Nagisa's parents, and the dormitory where Youhei Sunohara lives. Throughout the story, glimpses into an Illusionary World are shown. This world is devoid of all life except for a young girl, though she later makes a body out of junk pieces through which the player can interact with her. The remaining half of the story takes place in the same city, after the conclusion of the first half. While the town's name was never directly mentioned, one can infer that the town's name is Hikarizaka based on the many companies and establishments that share this name.

There are recurring themes that appear throughout the story. The main theme is the value of having a family, as the title of the series implies because the main scenario writer Jun Maeda mistakenly thought the name of the Irish band Clannad meant "clan" or "family" in Irish. Of the six main characters, Tomoya, Nagisa, and Kotomi have no siblings, though their parents are major factors in their stories. Nagisa's story was written to incorporate what Maeda described as a "perfect family" with a focus on mental consciousness. In Nagisa's story, there is a recurring appearance of "The Big Dango Family" (だんご大家族 Dango Daikazoku) (a fictional group mascot for children) that Nagisa is fond of. Tomoya's and Nagisa's characters were written in a style to exemplify a "growth to adulthood" by the end of the story. Fuko's and Kyou's stories have their sisters playing an integral part, and Tomoyo's story is influenced by her entire family. A minor motif of Irish words continues with the opening theme of the game, "Mag Mell", which means roughly "plain of joy" and is connected with Irish mythology. The arrange album, a short music CD that contained remixed versions of songs in the game, that was bundled with the original game release was titled Mabinogi, which was a collection of prose stories from medieval Welsh manuscripts.