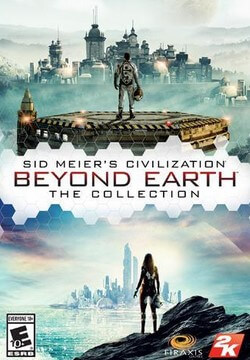 Sid Meier's Civilization: Beyond Earth is a turn-based strategy, 4X video game in the Civilization series developed by Firaxis Games, published by 2K Games and released for Microsoft Windows on October 24, 2014, the Mac App Store on November 27, 2014 and for Linux on December 18, 2014. A spiritual successor to Alpha Centauri, Beyond Earth shares much of that game's development team, as well as some concepts which were introduced in the 1999 title. The game's setting is unique to the Civilization series in that it takes place in the future, with mankind traveling through space and founding colonies on extraterrestrial planets after Earth becomes uninhabitable due to an undescribed disaster known as "the Great Mistake".

An expansion pack, titled Rising Tide, was released on October 9, 2015.

Beyond Earth is a turn-based strategy game played on a hexagonal-based grid, iterating the ideas and building upon the engine of its predecessor, Civilization V. Co-lead designer David McDonough described the relationship between the two games by saying "The bones of the experience are very much recognisably Civ. The idea of the cities, city-base progression, leaders, the passage of time, tile-based, turn-based, building improvements, technologies. A lot of them are very familiar themes to the Civ player."

Changes from the traditional Civilization formula

There are a number of significant changes from the Civilization model. In previous Civilization titles, players selected from historical empires led by historical figures, each with preset personalities. In Beyond Earth, players make choices at the beginning of the game, including what sponsors backed their expedition, what kind of spacecraft they used to reach the planet, and who and what they brought to the new world, allowing players to create a customized civilization of their own. Early decisions have a significant effect on the gameplay. While previous Civilization titles have had linear tech trees, Beyond Earth has a "tech web" which branches off in several directions, forcing players to choose only one at a time. The game intentionally does not allow for technology trading between civilizations (though it can be stolen), and it is difficult to unlock all of the game's technologies in a single playthrough.

The "affinities" are overarching philosophies on human advancement that shape players' technological advancement and unlock affinity-unique units. The Harmony affinity aims to co-exist with the planet, utilizing genetic modification, and is able to domesticate the native wildlife. The Supremacy affinity puts its trust in advanced technology, and utilizes highly specialized units that aid each other on the field. The Purity affinity is isolationist, building powerful defensive structures and attempting to make the new planet more Earth-like. Each affinity has a special project that is unlocked once fully embraced, and grants victory to the player who completes it first. Other victory conditions include conquering the other factions by force and following the traces of an alien civilization in order to ultimately establish contact.

A quest system has been added to the basic civilization formula to further differentiate this game. Quests can come from the construction of buildings or the discovery of certain items. Many quests give the player a choice on what perks they want.

Aliens are more than just the "barbarians" of a traditional civilization game. They tend to be in much greater numbers and can put up a much bigger fight in the beginning of the game. Should the player choose to provoke them, aliens tend to be more aggressive, and may openly attack the player's lands.

An orbital layer has been added to Beyond Earth. Satellites launched around a faction's orbital layer provide bonuses to the tiles below them. For example, if a player launches a solar collector, any tile below this collector will provide the player with an additional energy bonus. In the later game, some satellites can serve as weaponry or can help transport units across the map. To counter orbital units artillery style units can shoot them down.

Additionally, many of the later game technologies that were present in previous Civilization titles are now available very early in the game, or, as some developers put it during a YouTube game/interview, players are not "reinventing the wheel".