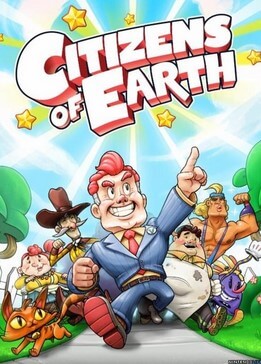 Citizens of Earth is a role-playing video game developed by Eden Industries and published by Atlus for Microsoft Windows, PlayStation 4, PlayStation Vita, Wii U, and the Nintendo 3DS.

Citizens of Earth has been described as "a giant spoof on EarthBound" in which "you must collect your constituents like Pokémon". In it, you take the role of the newly elected Vice President of Earth, who begins his first day in office facing protestors, a missing President, and a suspicious coffee shop. As the game progresses, characters are added to the party, each with a unique title and personality, like Hippie Guy and Programmer.

Enemies are strewn about the overworld map, and should the Vice President get too close, a separate battle screen will open up. He doesn't do any fighting himself, but instead gives commands to his party of up to three characters.

Meghan Sullivan of IGN gave the game a 6.5/10, saying "It charmed me with its blend of old-school RPG and contemporary satire, but nearly lost my vote with its sluggish pacing, irritatingly high enemy encounter rate, and crashes".