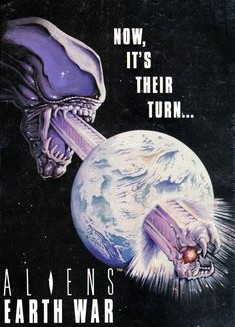 
Alien Earth, set in a post-apocalyptic timeline, is an isometric pseudo-3D action-adventure game for Windows. It has RPG elements, including dialogue trees, so it can also be called an action role-playing game, but it uses resource management as puzzles, requiring the player to combine items in order to advance in the game. It was created by Krome Studios Melbourne, in 1998, when they were called Beam Software Pty. Ltd.

What remains of Earth and most of its inhabitants after a nuclear holocaust is dominated and enslaved by the insect-like humanoid Raksha, invaders from another planet. Many years later, only the Resistance remains free, in the sewers of a ruined city. The player takes control of Finn, a villager in a jungle that the Raksha use to hunt their slaves as prey. A Raksha hunting lord marks Finn as a troublemaker, and he must outwit the Raksha, and seek aid wherever he can find it, to survive. His nemesis vanquished, Finn searches for answers about the fate of his civilization in a wartorn city, despite the Scavengers hunting through the ruins for scraps of remaining technology...and intruders.

Resource management is a key part of the game; items are collected, as in most games, but also combined; the latter is crucial to completing the game. Combining a wooden pole with a metallic blade forms a Spear, for example, or a empty bottle, petrol and a rag cloth to form a molotov cocktail. Separate NPCs make scavenged Raksha weapons usable and sellable, and level up Finn's psionic abilities. Finn's fighting abilities use a skill levelling system; the more Finn uses a weapon, the better he gets at using it.

Next Generation reviewed the PC version of the game, rating it three stars out of five, and stated that "Well-designed and (mostly) well-implemented, it might not be flashy, but the game possesses a depth and quality that marks it as one of the brighter spots in the lineup this month."