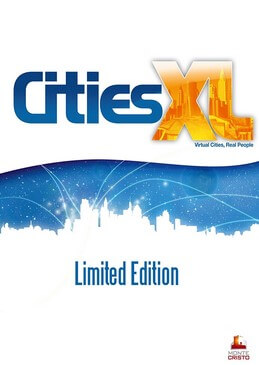 Cities XL (originally Cities Unlimited) is a city-building video game developed by Monte Cristo as a sequel to their earlier title City Life. It was originally scheduled for release in the first quarter of 2009, but was eventually released on October 8, 2009. The game allowed players to play online and interact with others on massive persistent planets, and to work together by trading resources or building blueprints in order to satisfy the needs of city inhabitants. However, on March 8, 2010 the online service was closed and the game became single-player only.

Cities XL allowed players an option to play on a persistent online virtual community known as a planet which required a monthly subscription fee. As a member of a planet, players were able to build their cities in a virtual world populated by other subscribers, trade resources such as electricity with other players, work together to create structures such as the Eiffel Tower, and visit other cities as an avatar and host events.

On January 27, 2010 Monte Cristo announced due to a low subscription rate they would be closing the multiplayer online service, and they did so on March 8, 2010. A patch was released on the same day allowing players to use buses in single-player mode, as they had previously only been available in multiplayer mode.

The game offers the designation of three types of building lots: residential, commercial and industrial, each of which can have a different density. Residential lots are furthermore distinguished by four social classes: unskilled workers, skilled workers, executives, and elites. Before designating building lots, players are required to select which class of residents may live there. The social class chosen for a lot will not be modified by the simulation.

To create building lots, players can zone an area of the map in which, upon confirmation, individual building lots will be created by the game. Players can also plop building lots individually. A Mass Placement Tool has been announced in previews allowing players to select tags that define what categories of buildings they want to see created when outlining an area of lots.

Cities XL allows players to create a road network of a variety of road types at many different angles and curvatures. Bridges and tunnels are also part of the simulator. Other transport options that were planned to be included in the game were airports, trains, ferries and subways. An add-on introducing buses to the game was released in December 2009.

An unimplemented feature known as Gameplay Extension Modules (GEMs), also referred to as Game Enhancement Modules, were features, such as a ski resort or a beach, that would have been implemented into a city and managed in extra detail by the player. For example, in a ski resort GEM, it would have been possible to add ski lifts, restaurants, shelters, and ski-trails. It was planned that when a player was managing a GEM the main city simulation was stopped, but successful management of GEMs could help enhance a city.

All games from the serie "Cities XL"