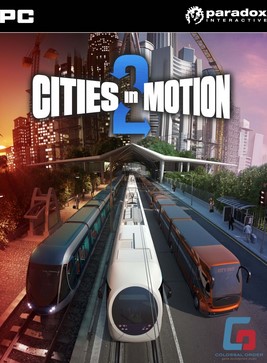 Cities in Motion 2 is a 2013 business simulation game that was developed by Colossal Order and published by Paradox Interactive and is the sequel to the popular mass transit simulation game Cities in Motion. As with its predecessor, the goal of the game is to create efficient public transport systems in different major cities of the world. In this edition, there are several new features that the developers introduced based on community feedback about the previous game, including day/night cycles, rush hours and the ability to create timetables. The additions also include dynamic cities where players' decisions have a notable impact on city growth, and the inclusion of cooperative and competitive multi-player.

Cites in Motion 2 received mixed reviews. It holds a Metacritic score of 72 (based on 15 reviews), with many critics citing the game's lack of a smooth interface and steep learning curve as the two biggest problems.