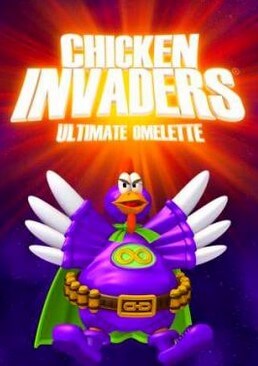 Chicken Invaders is a series of shoot 'em up video games, developed by InterAction studios and released for Microsoft Windows, OS X, Linux, iOS, Windows Phone, and Android platforms. There are six games in the series.

The main theme of the game is a battle between a lone combat spacecraft and a technologically advanced race of space-faring chickens, who are intent on subjugating (and later destroying) Earth. The games make heavy use of humor, especially in the form of parodies of Galaxian, Star Wars, Space Invaders and Star Trek.

Chicken Invaders is the first game in the series. It is both a single player and two-player game. The player takes control of a lone spacecraft, and must protect Earth from swarms of invading chickens. The game features weapon power-ups that resemble gift boxes, and the player can use these to upgrade their weapons. Chickens drop eggs which must be avoided, otherwise the player will die if they collide with these projectiles. Chicken drumsticks fall from the chickens when they're killed, and if the player collects enough of these they earn a missile. These missiles can then be used to wipe out everything (except the player) on the screen. The game also features infinite levels. In each level, there are 10 waves, and at the end of every level is a boss, which must be defeated in order to advance (or warp) to a new system. The gameplay is endless, so there is no ending to the game; it continues on and on, until the player has finally lost all of their lives and the game is over. The difficulty increases each time players advance to a new chapter; the enemies move or fall faster, and objects like asteroids move faster, too. There are no holiday editions of this game; this is the only game that has no Christmas, Easter, Thanksgiving, or Halloween Editions made for it. This is also the only game in the series that hasn't been ported to other platforms. It is only for Microsoft Windows.