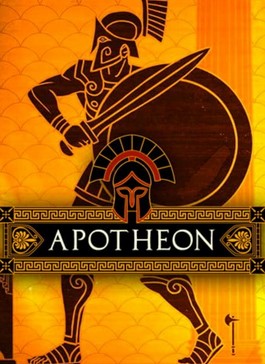 
Apotheon is an action platformer video game developed and published by Alientrap for Microsoft Windows, OS X, Linux, and PlayStation 4. The game was released on Microsoft Windows and PlayStation 4 on February 3, 2015 and on OS X and Linux on February 10, 2015. Apotheon is Alientrap's second commercial game and utilizes a unique art style based on ancient Greek pottery, particularly in the black-figure pottery style.

Apotheon is a fast and brutal 2D action game with an art style and heroic narrative based on Ancient Greek mythology. The player controls Nikandreos, a young warrior who, with the help of Hera, fights the Olympian gods. Nikandreos can use his fists but, also, different weapons of the ancient world, including xiphos, battle axes, clubs, spears, bows, knives and more. Apotheon can be played in three different difficulty settings.

In the times of Ancient Greece, the Gods have begun to punish the humans of Earth, resenting their arrogance and defiance among their societies. Zeus, the father of all the Gods, has forced his children to stop giving their gifts of life to the Earth, so that all humans are soon deprived of animals, food, and even daylight. With most of the Earth cast in darkness, man begins to fall prey to the savage destruction of their cities.

Meanwhile, in the Village of Dion, invaders ransack the entire area and lay waste to most of the village. A young warrior named Nikandreos awakens to find his home destroyed and many of the raiders killing Dion soldiers and citizens. Arming himself up and with the help of the surviving soldiers, Nikandreos is able to cast away the invading forces and slay their leader. In the temple, Nikandreos meets face-to-face with Hera, the wife of Zeus, who congratulates him for his victory in saving the village. Hera informs Nikandreos of Zeus' anger with the humans, as well as her hatred for his many affairs with other Gods and mortals. Wanting revenge as well as way to help Nikandreos save his people, Hera tasks him to slay Zeus and his siblings so that Nikandreos might bring back their gifts and save humanity. Nikandreos agrees and ascends to Mount Olympus to begin his hunt against the Gods of Greece.

Nikandreos first enters the Agora of Olympus, where he must find and take the gifts from the gods Artemis, Demeter, and Apollo. Heading into the Forest of Artemis, Nikandreos completes many hunts of fantastical creatures to gain her attention, and soon kills her afterward to gain her magical Bow. Nikandreos attempts to slay Apollo, but is knocked unconscious and imprisoned within a cell. With the help of the god Helios who was also imprisoned by Apollo, Nikandreos escapes and is able to slay all of Apollo's captains and save Daphne from her own imprisonment as a tree.

Nikandreos then slays Apollo for his lyre. However, in trying to find Demeter, she reveals she cannot give her sheaf, feeling sorrow for the taking of her daughter Persephone. Nikandreos finally descends into the lair of Hades to find Persephone, his wife, who instead of fighting back, rightfully gives her seeds to him so that he may bring life back to Earth. In return, Demeter sympathizes with Nikandreos and hands over her sheaf too. While attempting to head back to his village though, Zeus halts Nikandreos and accuses him of his arrogance and attempt at becoming a god, and thrusts him back to Earth.

Nikandreos lands to find Dion in more ruin then before, with the wrath of the Gods now extending to physical aggression on Earth. Hera apologizes for her earlier refusal to help, but warns Nikandreos that Zeus has now tasked the remaining powerful gods Poseidon, Ares, and Athena to bring fury and destroy all of humanity.

Heading toward the Acropolis of Olympus, Nikandreos goes to slay each of the final gods, and in return becoming more and more powerful from stripping them of their powers. However, upon returning once more to Dion, Nikandreos finds his home and his entire people annihilated and in waste. Hera tells him though that the time to strike Zeus is now, with most of his children and brethren slain and the power now in Nikandreos' hands. In a final single raid on the Fortress of Zeus, Nikandreos boldly ascends to the heavens of Olympus. He finds Hera chained with Zeus knowing her betrayal, leading to a final battle between the man and the god. Nikandreos successfully slays Zeus, gaining the right to power from Zeus' thunderbolt. Hera boasts at her victory and demands Nikandreos to free her. However, Nikandreos is sick of the rule of Gods and Hera's manipulations. At this point the player can choose to leave Hera or to kill her with Zeus' thunderbolt.

Descending back to Earth, Nikandreos finds a giant-sized Zeus bragging and roaring of his own victories as a God, refusing to believe his own defeat from a mere mortal. With all of the powers of the Gods within him now however, Nikandreos also grows to the size of a God, and brutally fights and kills Zeus finally. Seeing the Earth in sad ruins, Nikandreos roams the desolate landscape. In finding some clay and rubble, Nikandreos forms a human being and gives it life, signaling the rebirth of humanity and the fall of the Gods. It is left open if Nikandreos will be a loving god himself, or grow disillusioned with his creation like the gods before him.

The name Apotheon means "exalted to the state of godhood", which reflects the deification of Nikandreos, the protagonist, at the end of the game.