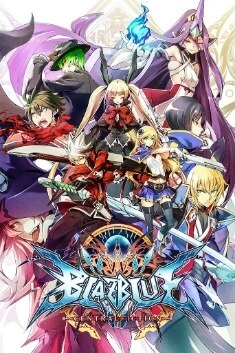 BlazBlue: Central Fiction, released in Japan as BlazBlue: Centralfiction (ブレイブルー セントラルフィクション BureiBurū: Sentorarufikushon) is a 2-D fighting video game developed by Arc System Works. It is the fourth game in the BlazBlue series, and is set after the events of BlazBlue: Chrono Phantasma. It is also the final game with Ragna as the main protagonist. and serves as the conclusion of the Azure Saga that began in Calamity Trigger.

Hibiki Kohaku: Kagura's assistant. He is a member of a clan of assassins and was raised to serve Kagura. Originally seen as a loyal servant, he is actually a disturbed person whose desire is to kill Kagura and become a truly emotionless killer.

Naoto Kurogane: The main protagonist of Bloodedge Experience. He appears in Central Fiction due to Raquel sending him into the current timeline of BlazBlue where he died apparently to save their world.

Nine the Phantom: The witch and one of the Six Heroes and the boss of "Act I: Phantom of Labyrinth".

Hades Izanami: One of the main villains of the series. She is the one who commands Terumi and Relius, used Saya as a vessel who is also a living doll forged by Relius and is the manifestation of the girl inside Amaterasu's "Drive".

Es: One of the main characters of the XBlaze spinoff series.

Mai Natsume: The main protagonist of the Remix Heart and its sequel Variable Heart manga.

Susano'o: Yuki Terumi after becoming one with the Susano'o unit and his original form. He is a secret character unlocked by completing the story.

Jubei: One of the Six Heroes, he is the father of Kokonoe, and the husband of Nine. He was the mentor of Ragna and Jin and is a cat beastkin. He was released on August 31st 2017 for North America and Japan, and September 4th 2017 for EU.

Following the gameplay from BlazBlue Chrono Phantasma Extend, there are additional changes and new mechanics. The Overdrive activation's duration is now shown under the Burst Gauge in the form of a countdown timer (which counts seconds and split-seconds); The character portrait near the health bar shakes when taking damage; and each character's emblem appears on their side when the phrase "The Wheel of Fate is Turning" shows at the start of the first Rebel. The new gameplay mechanics are: Exceed Accel, a special type of Distortion Drive, which is executed a same input as Overdrive activation by holding it during Overdrive activation, or pressing it, begins with the character performing a specific attack in their move-set, and once it connects the rest of the background shatters away into the Overdrive background effect when the attack is performed. It dishes large damage, but immediately ends Overdrive; and Active Flow, which acts as the opposite of Negative Penalty status. A character that fights offensively goes into an Active Flow, which boosts damage and recovery of the Burst Gauge. Active Flow also increases the damage of Exceed Accel (for some it may add extra effects and animations). When a character enters Active Flow, his/her emblem on the health bar becomes purple pink. The purple pink color itself is also shown surrounding the Overdrive Gauge, when a character is close to entering Active Flow. A character can only enter Active Flow once per round.

The game was released for the arcades on November 19, 2015, with a location test having been done in mid-July of that year.. A console version was released in Japan on October 6, 2016, in North America on November 1, 2016, and Europe on November 4, 2016 for the PlayStation 3 and the PlayStation 4, both physically and digitally. Aksys Games has confirmed a limited edition for North American markets which includes a soundtrack disc, a nendoroid figure and a hardcover art book.