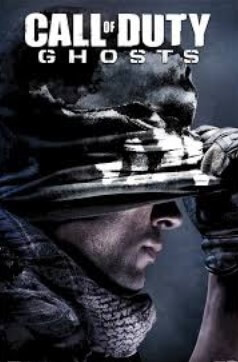 Call of Duty: Ghosts is a first-person shooter video game developed by Infinity Ward and published by Activision, it is the tenth major installment in the Call of Duty series and the sixth developed by Infinity Ward. It was released for Microsoft Windows, PlayStation 3, Xbox 360, and Wii U on November 5, 2013. The game was released with the launch of the PlayStation 4 and Xbox One.

Ghosts received generally positive reviews from critics, with most praising its multiplayer gameplay and introduction of the new game mode Extinction, but criticizing it for its single-player campaign, rehashing of familiar concepts, general lack of innovation, and storyline ending.

In Call of Duty: Ghosts, the story is mostly told through the eyes of one single character, Logan Walker. Players assume the role of Logan for most of the game, with several other playable characters, including an astronaut specialist named Baker, Sergeant Thompson, member of Icarus and Logan's father, Elias Walker, with an all new option to play as Riley, the first non-human playable character in the franchise.

The multiplayer in Call of Duty: Ghosts features changes from that of previous Call of Duty games as some new mechanics have been added to it. Maps now have areas that can be altered or destroyed. There is a nuke-like kill streak reward, the KEM Strike. The player can get the ODIN kill streak by either getting a certain amount of kills or by killing the top player on the other team and then completing various challenges after picking up a blue briefcase that is dropped. The sniper rifle scopes also have new "dual render technology" allowing the player to see around the outside of the scope (although blurred) when zoomed in. On October 3, a new multiplayer type was revealed, called Squads. This features a squad that the player can build and the player can face other squads around the world. The player's squad can be leveled up and will act like a true individual. "Octane", "Prison Break", "Tremor", "Freight", "Stormfront", "Siege", "Warhawk", "Sovereign", "Overlord", "Flooded", "Strikezone", "Whiteout", "Stonehaven" and "Chasm" are the maps that are in Call of Duty: Ghosts so far. The dynamic map, "Free Fall", was a pre-order bonus. The game now features playable female soldiers.

Extinction is a new 4-player co-op mode, which pits the player(s) against various types of aliens (known altogether as Cryptids) in a base-defending survival style map. The main goal is usually to destroy all of the Cryptid hives scattered across the map (with the exception of Awakening and Exodus; the former requires players scanning for obelisks in an area which need to be destroyed, while Exodus features generators which the players have to activate). Players choose from four different class types, with unique traits and customizable loadouts. The player(s) can level up their classes, unlocking more weapons and equipment for their loadouts. This mode is unlocked by finishing the first level of the Campaign.

The first map, "Point of Contact", is included within the base game, and serves as an introduction to the game mode. The map takes place in an abandoned city in Colorado, two weeks after the events of the campaign mission "Ghost Stories".

The second map, "Nightfall", is released as part of the Onslaught DLC pack, and is advertised as the first of the four episodic contents for Extinction. The map takes place in an Alaskan research facility, 14 weeks after "Point of Contact", and introduces two characters central to the story: Dr. Samantha Cross and Cpt. David Archer. The map also introduces two new types of Cryptid aliens, one of which (the Breeder) serves as a boss-type enemy. Players are also given access to a mysterious and powerful weapon: The Venom X. Players can unlock several pieces of intel, revealing details about the story revolving around Cross and Archer.

The third map, "Mayday", is released as part of the Devastation DLC pack, and is the second of four episodes of Extinction. The map takes place on board a Naval ship, 26 days after the events in "Nightfall", and introduces two more new types of Cryptids: The Seeder (Which looks like the red seekers) but is bright orange and spawns plantlike turrets that shoot projectiles at the players, and the Kraken, the large, multi-tentacled boss at the end of the chapter. In addition to weapons scattered throughout the ship, players can access schematics to build powerful offensive and defensive weapons, including 4 variations of the Venom X from the previous chapter. Players can also find intel as well to learn more about the story of Extinction.

The fourth map, "Awakening", which is released as part of the Invasion DLC pack, is advertised as the third episode. The map takes place in an underground Cryptid hive, 36 hours after "Mayday", and introduces three new types of Cryptids: the flying Gargoyle, the explosive Bomber, and the powerful Mammoth. The Cryptids' masters, the Ancestors, are also seen in the map. The players have access to ARK attachments, which turn weapons into laser weapons, greatly increasing their power. As with the previous two maps, intels can be found to discover more information regarding the story.