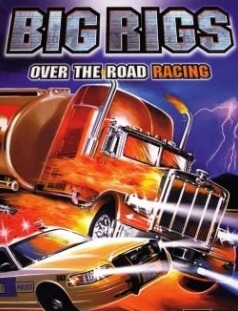 Big Rigs: Over the Road Racing is a racing video game developed by Stellar Stone and published by GameMill Publishing, released for Microsoft Windows on November 20, 2003, in North America.

The packaging of Big Rigs states that the main objective of the game is to race a semi-trailer truck (known colloquially as a "big rig") in order to safely deliver illegal cargo being carried by the vehicle, while avoiding the local police force. In the game itself, no objectives beyond reaching the finish line of a circular track are presented, no load is attached to the trucks, and the police are nowhere to be found. Much of the game instead centers on the player racing their truck against fellow drivers to the finish line; however, in the earlier versions the player's computer-controlled opponent vehicles have no AI and never move from the starting position. In a later version, the computer-controlled opponent will race around the track but will stop just before crossing the finish line. The timer in the game is merely aesthetic and has no limit on the gameplay. In addition, due to a lack of collision detection, there are no obstacles to navigate within the game, and the player is able to phase through buildings and terrain, or even leave the confines of the game level altogether.

Big Rigs: Over the Road Racing was unanimously panned by critics. The game's criticism was largely directed at its "blatantly unfinished" state: lack of collision detection and frequent violation of the laws of physics, frequent and major software bugs, poor visuals, and severe lack of functionality. As a result, the game is widely regarded by critics as one of the worst video games of all time, with some saying it is "so bad it is good", and bugs being the game's key feature. Because of the notorious negative reception, the game has attracted a cult following. After Stellar Stone shut down, Big Rigs producer and programmer, and owner of TS Group Entertainment, Sergey Titov, went on to work for Riot Games on League of Legends, before releasing the controversial title The War Z in 2012.

Big Rigs: Over the Road Racing is notorious for being released in a pre-alpha state. The player may freely drive on and off roads without any loss of traction, up or down 90-degree slopes with no loss or gain of lateral speed, through structures such as buildings, trees, bridges, checkpoints, and enemy vehicles (due to a lack of collision detection), and out of the boundaries of the map into an endless grey void. If the player presses and holds the reverse key, the vehicle will accelerate until the floating point variable responsible for storing velocity overflows. It is possible to accelerate until reaching 1.23×1037 miles per hour (1.98×1037 kilometres per hour; 5.8×1020 light-years per second) or more than 1028 times the speed of light. At this point, all checkpoints will turn green and the player will instantly win the race because this extreme speed causes the vehicle to be literally everywhere at once. However, the truck will halt instantly when the reverse key is released, regardless of its speed.

Opponent vehicles do appear in the game; however, they have no artificial intelligence and never leave the starting position, which makes losing impossible. To complete the race, the player must pass through all the course's checkpoints (which can be done in any order) and then cross the finish line. Upon completion of a race, the game displays a large three-handled trophy and the text "YOU'RE WINNER !" sic. The game occasionally fails to distinguish between whether the player is starting or finishing the race when they pass through the starting/finishing line, and so this congratulatory screen may appear within seconds of starting a game, thus ending the race prematurely on the first pass.

Four cosmetically different trucks are playable; they all perform identically. Though there are five courses from which to choose, only four are playable. The fifth does not function and selecting it crashes the game.

Stellar Stone released a patch that addressed some of the game's complaints. With the patch, the opponent vehicles participate in the race but stop before they reach the finish line, keeping the game impossible to lose. "Nightride", the non-functional track, was replaced with a mirror image of the first track, "Devil Passage 1". A re-released version of the game also replaced the "YOU'RE WINNER !" text with "YOU WIN !". The patch also added sound effects, a feature that was missing from the original game, and later copies shipped with the patch by default. However, no effort was made to alter the physics of the game, and other common complaints were not addressed.

Big Rigs: Over the Road Racing was developed in Ukraine, though commissioned by California-based company Stellar Stone. The game was developed offshore so the company could produce the game at a relatively low expense of about US$15,000, compared to costs three to five times higher when working with other European or United States-based developers.

Big Rigs was built on Eternity, a proprietary game engine developed by Sergey Titov of TS Group Entertainment, who licensed it to Stellar Stone in exchange for a "large chunk of the company." According to an interview with Titov on yourewinner.com, a Big Rigs fansite, the company "wanted to do things cheap and was not willing to pay even 200-300 thousand U.S. dollars" to create an engine of their own. Titov is credited in the game as producer and co-programmer, but in the interview, he claims he "didn't have much design and development input or any power to stop Big Rigs from being released."

Big Rigs was originally intended to be released with Midnight Race Club: Supercharged! as a single, combined title. Instead, GameMill Publishing decided to split the project into two games, early in production. Both games were released in their pre-alpha stage. The reason for the splitting is unclear, although Titov speculates it was to increase sales.

(0) Comments on "Big Rigs: Over the Road Racing Full Version"