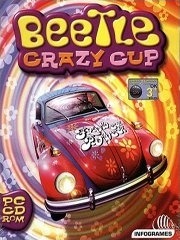 Beetle Crazy Cup, released in North America as Beetle Buggin', is a 2000 racing video game developed by Xpiral and published by Infogrames for Microsoft Windows. The game features vehicles by Volkswagen as part of a licensing deal between Infogrames and the automotive company.

The player begins the game with a standard 1960s Volkswagen Beetle; additional vehicles become available after the player wins races and earns points. The game features 20 race tracks that include environmental elements such as rain and bright sunshine, and includes 17 vehicles that come in more than 50 different styles. In addition to original and New Beetles, the game also features the Volkswagen Karmann Ghia, the Volkswagen Thing and Volkswagen buses as playable vehicles. The game includes three gameplay modes: Quick Race, Championship, and Beetle Challenge. Each mode is further divided into five racing modes, known as events, that vary the gameplay:

Buggy: a beach race in which the player must avoid wet sand.

Cross: a stadium with a dirt track consisting of dunes and slopes.

Jump: a track in which the player uses "nitro boosters" to achieve a large jump.

Monster: a track filled with obstacles in which the player's vehicle is transformed into a monster vehicle with four large tires. The player must smash other vehicles and cause destruction within a time limit, while avoiding traffic cones.

Speed: a street race on a two-lane highway with no nitrous boosters or large obstacles.

Specific types of vehicles are used for each event. The game includes a multiplayer mode for two to six players, using a local area network.

Beetle Crazy Cup was developed by Xpiral and published by Infogrames. Miguel Tartaj, an executive producer at Xpiral, explained that the idea for the game's concept "came from doing all sorts of driving trials. VW had just announced the launch of the New Beetle and we are all 'classic' Beetle enthusiasts so we decided to focus on the Beetle and give it what it deserves: a great game dedicated just to it. The Beetle has always been very popular and people have done incredible things with it since it was first designed." Xpiral secured a publishing agreement with Infogrames after a few meetings.

Infogrames signed a licensing deal with Volkswagen to feature the automotive company's vehicles in the game. Xpiral worked on the game for two years. The game was developed with Ambush, an original 3D game engine that was created by Xpiral. The game was announced by Infogrames in December 1999. The game was released in the United Kingdom on 29 February 2000, and in the United States on 6 April 2000.

Beetle Crazy Cup received "average" reviews according to the review aggregation website GameRankings. Anthony Baize of AllGame called the game "a gem for racing fans and Volkswagen aficionados". Baize praised the game's graphics and its surf music, and wrote that the "best aspect" was the event modes. Tom Price of Computer Gaming World wrote that it "is a near-perfect replication of the unique sensation of owning and driving an older Volkswagon sic." Price noted the vehicles' "cartoony" graphics, "tinny and farty" sound effects, and wrote that they "handle like crap, just like a real VW," but stated that the game "has a weird fun factor" because of its various gameplay modes and diverse lineup of Volkswagen vehicles aside from Beetles.

Amer Ajami of GameSpot wrote that the different game modes keep Beetle Crazy Cup "fresh and enjoyable", but criticized the Jump and Monster events for difficulty relating to the controls. Ajami wrote that the vehicles "are modeled with a fair amount of detail and are skinned using adequate texture sizes. However, the tracks are somewhat lacking by comparison: The textures used along most of the courses are washed out, and sprite-based trees, crowds, and other outlying objects are typical throughout the entire game." However, Ajami noted that the game's graphics were "on par with similar racing games."

Jeff Nash of The Electric Playground called the game's controls "surprisingly solid" but criticized the small number of tracks offered in each racing event, and felt that the game did not offer enough vehicles. Because of the "sluggish" controls, Nash wrote that the Monster event was "a bore to play as the slow movement makes it very difficult to stay interested." Nash noted that the Speed mode "is by far the most fun" because of its "nice selection of tracks with just the right amount of twists and turns", and stated that the Buggy and Cross events "are both respectable, but the unimaginative track design in these modes makes their races wear thin too quickly." Nash wrote that the game's images "are very crisp, and the details around the track are well above average. The graphics do suffer where effects are concerned, however. Reflection, lighting, and smoke effects are all very bland, and often seem to have been thrown in just for the sake of having them there." Nash praised the sound effects, but wrote that the music "is so abysmal that it could drive almost anyone to the brink of insanity in no time."

Jim Preston of Daily Radar gave the game a positive "Hit" rating, but called the Monster event mode "the weakest of the five modes, as we really weren't interested in avoiding cones or mastering precision driving in a monster truck." Preston noted that the graphics "are, not surprisingly, ok. The cars are shiny and realistic, but there is no damage modeling, so plowing headfirst into a guard rail won't cause a scratch. And don't look for any icing on the cake; there are no realtime shadows, 32-bit color or colored lighting here. But the weather effects are fairly realistic, and the night drives through the gloom are actually rather pretty. The backgrounds during the Speed and Buggy modes are realistic and colorful, although not widely varied." Preston concluded that Beetle Crazy Cup was an "unpretentious little game that doesn't claim to be anything more than a budget title."