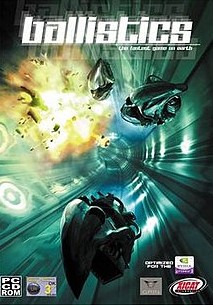 Ballistics is a futuristic racing computer game developed by Grin and published by Xicat Interactive in 2001. Grin developed an arcade version of the game, released in 2002 featuring a unique reclined seating position cabinet by Triotech. Players race across seven different tracks in various leagues against other competitors on high-speed hoverbikes.

The game was Grin's first to be released, and featured the first version of their Diesel game engine. Grin worked closely with NVIDIA to incorporate then new technologies into the game, and was marketed as one of the flagship titles for the GeForce 3 Series of graphics cards.

Critical reaction was average, with reviewers being impressed by the beauty of the graphics and the thrilling depiction of speed. They were however, slightly disappointed with the shallow nature of the gameplay. A newer version of the arcade game was released in 2003, incorporating motion simulator technology into the arcade cabinet.

Set in 2090, the game is centred on a fictional extreme racing sport known as Ballistics, a descendant of Formula One. The player takes the role of a Ballistic's pilot, racing hoverbikes called speeders through the inside of tubes which form the courses. The speeders are magnetically attached to the race surface, allowing the player 360 degrees of movement along the left/right axis. The player can detach the speeder from the track and navigate down the center in order to avoid track obstacles and to acquire the power-ups exclusively located there. Players must try to follow the outside of each curve, as hitting the inside of a curve at speed could lead to an involuntary detachment, leading to a loss of control and seconds dropped in securing reattachment.

Heat levels on the speeder must be monitored, as although there are no set top speeds for the vehicles, they can explode if allowed to overheat. Heat builds up from acceleration and from collisions. To counteract this, the player may activate the onboard cooler, however, this will slow the vehicle down. Designated cooling strips along the track and the Ice power-up can cool the vehicle without a speed penalty, allowing the player to continue accelerating.

Speeders have a boost meter, showing how much fuel is available for the onboard speed boost. Although the boost provides greater speeds and acceleration than the standard throttle, it also increases the speeder's heat levels. Designated booster load zones along the track replenish the meter, and a super boost power-up is available which doubles the potency of the boost.

Players are rewarded with cash for attaining high speeds, placing highly in races and obtaining the Flip-Score power-up. Cash can be used in between races to upgrade their speeder by purchasing new parts. Parts are split into four categories - chassis, cooler, engine and front shield, with each affecting the speeder in different ways. Some tracks may favour a particular set-up over others.

There are seven tracks included in the game, with locations inspired from different parts of the globe, from Belize to Tokyo. Progression through the game is achieved by competing in and winning races against computer-controlled racers spread over different tracks and in different leagues. Players begin in the Rookie league, across three of the tracks, where the chances of detachment from the race surface are decreased and rates of acceleration reduced. Success in the Rookie league unlocks the less forgiving Pro league with more tracks on which to compete. Further success unlocks the most difficult league, the Ballistics league, competition in this league occurs across every track and to complete this, the player must place first in every race.