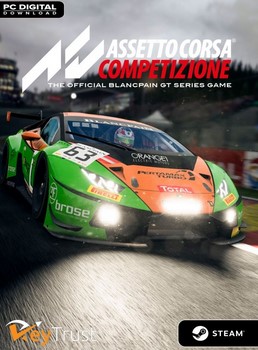 Assetto Corsa Competizione (Italian for "setup tuned for racing", "competition") is an upcoming sports car racing simulator developed by Italian video game developer Kunos Simulazioni. The game is an officially licensed simulation of the 2018 and 2019 Blancpain GT Series season Sprint and Endurance Cups and the Total 24 Hours of Spa, and is set to serve as a platform for esports.

Assetto Corsa Competizione is a racing simulator that features Free Practice, Hot Lap, Superpole, Hot Stint, Quick Race (one race up to thirty minutes in length), Sprint Race Weekend (with up to two practice, two qualifying sessions and two races up to sixty minutes in length) and Endurance Race Weekend (with up to two practice, three qualifying sessions and a top-ten superpole, as well as one or two races each up to twenty-four hours in length) modes for offline and online play.

Development of Assetto Corsa Competizione moved from an in-house developed graphics engine used in the studio's previous title Assetto Corsa to Unreal Engine 4 to ensure graphics engine support for night races and realistic weather conditions. With the new engine, an evolution of the tire and aerodynamic physics models used in the previous title, motion capture animations, modern audio solutions and the detailed focus on a single series and class of cars the developer aims to reach a higher standard of driving realism and immersion for the new title. All ten circuits of the 2018 Blancpain GT Series season are said to be reproduced with laser scan technology.

At Nvidia’s Gamescom 2018 keynote Assetto Corsa Competizione was announced to be among the first titles to support Nvidia RTX real-time ray tracing and Nvidia Ansel RTX on GeForce 20 series GPUs.

As part of a hot-lap competition hosted at the Thrustmaster booth Assetto Corsa Competizione was playable for the first time at E3 2018. During the 2018 Total 24 Hours of Spa weekend a hot-lap competition was hosted in the Pirelli paddock area and included a winners celebration on the circuit podium just when the real race on the circuit concluded, representing the first esports project undertaken by SRO.

On 27 March 2019 SRO announced the new SRO E-Sport GT Series in collaboration with Kunos Simulazioni featuring five rounds and Am, Silver and Pro driver classes for the 2019 season. The first round of the 2019 SRO E-Sport GT Series championship was staged at Autodromo Nazionale Monza during the 2019 Blancpain GT Series Endurance Cup race weekend. The winners were once again crowned on the real podium after the class podiums of the real race.