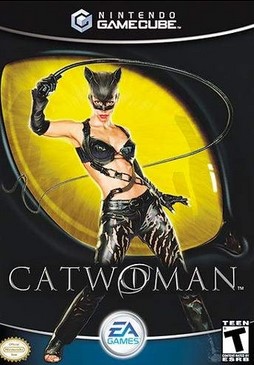 Catwoman is an action-adventure tie-in video game based on the 2004 film of the same name based on the fictional character. It features the likeness of the film's lead actress, Halle Berry; the character's voice is provided by actress Jennifer Hale.

The game is third person action plaformer where the player must use the heroine's cat-like strength and agility to travel through various environments and defeat various enemies. There is also sense exploration in the game, similar to the Tomb Raider series. Catwoman can climb up walls and swing from metal poles to navigate through the environment. Catwoman must also solve puzzles at certain parts of the game to advance further. The game also features a combat system for when fighting enemies. The player is able to upgrade moves and perform simple combo strings.

The game loosely follows the story of the movie. Patience Phillips, a shy office worker in the Hedare corporate empire, accidentally discovers her employers' dark secret and is subsequently murdered. She is then revived by a supernatural Egyptian cat granting her cat-like abilities. Now reborn as "Catwoman," she then embarks on a tale of revenge against the people who nearly murdered her.