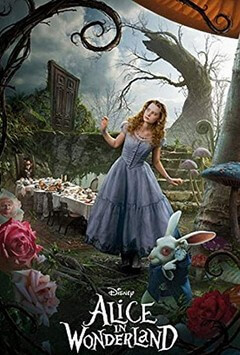 Alice in Wonderland is a pair of action-adventure video games published by Disney Interactive Studios. It was announced on July 23, 2009, that a video game based on the film would be released in the same week as the film for the Wii, Nintendo DS, Windows PC and Zeebo, with the soundtrack being composed by video game music composer Richard Jacques. The Wii, DS, and PC versions were released on March 2, 2010. The DS game is completely different from the Wii and PC versions.

Alice in Wonderland allows players to guide, protect and aid Alice as she journeys through the world of Wonderland while unraveling the game's many twisted mysteries. Along the way, players call on a diverse and unique cast of characters such as the Mad Hatter and Cheshire Cat who each have unique abilities to help evade traps and solve challenging puzzles. The Mad Hatter can help Alice alter her perception of Wonderland and take advantage of optical illusions to open up places in the world the player alone would not have noticed. Meanwhile, the Cheshire Cat can use his ability to make himself and objects appear and disappear helping Alice through this strange world. Players must choose wisely when using each of the characters' powers and combine the abilities to solve more complex puzzles.

GameZone's Michael Lafferty gave the Wii version of the game a 7.5 rating out of 10, saying, "Graphically this game scores well, and though the overall gameplay is nothing that has not been experienced before, the game still has a nice rhythm to it. It is what it is – a game adaptation of a movie, slightly offbeat, but accessible." On the other hand, GameSpot gave the game a 6 out of 10 "fair" rating. It noted some of the game's puzzle mechanics and "variety" as good points, while repetitive combat, bad voice acting, visual unevenness, and poor multiplayer were bad points. In comparison, the DS version of the game fared well, earning an 8.5 out of 10 or "Great" rating. For the DS, GameSpot criticized the combat and the occasional experience of not knowing what to do next. However, GameSpot praised the "visual direction," puzzles, characterization, humor, cleverness, and DSi features.