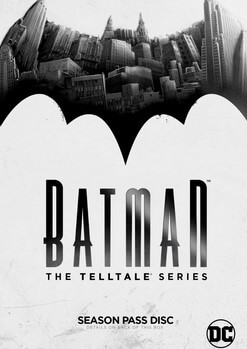 Batman: The Telltale Series is a 2016 episodic point-and-click graphic adventure video game developed and published by Telltale Games and distributed by Warner Bros. Interactive Entertainment under its DC Entertainment label. The game is based on Bob Kane and Bill Finger's Batman character, though not tied to any previous adaptation of the work in film or other media. A second season, titled Batman: The Enemy Within, was released in 2017.

The player takes the role of Batman, both as the superhero and as his alter ego Bruce Wayne. Telltale Games CEO Kevin Bruner has stated that playtime will be split evenly between them, though at times the game will offer the player a choice of whether to approach a situation as Wayne or as Batman. The game's narrative offers a "fresh interpretation of the universe set in current times, not tied to any existing iteration of Batman in games, film, or comics", according to Telltale Games. According to Bruner, the game is set a few years after Wayne decides to become Batman, giving them flexibility in their writing and gameplay to give the player some control on how they want to play the character without ties to any established narrative. The game features a branching narrative, similar to past Telltale games, giving the player options in approaching a situation and having that choice affect later events in the game. The game includes action sequences that are resolved similar to Telltale's other games, using quick time events. The series also includes investigation sequences, allowing the player to use Batman's detective skills to progress the story.

The series also introduces a new feature called "crowd play", available on both the PC and console versions of the game. Crowd play allows the game to be watched by an audience who can participate in the decision-making process. When this feature is active, the player provides their audience with a link to Telltale's website with a unique code to participate in that session through any web-enabled device. These additional players are given the option to vote at the game's decision points, with the results presented to the main player to judge which decision to make.

Optionally, the main player can have the game automatically take the most-popular decision for them. This mode is intended to be used for an audience at the same physical setting, such as a living room or movie theater; though this mode can be used through streaming services like Twitch.tv, Telltale warned that latency issues may hamper the viewing players' experience. Telltale's head of creative communications Job Stauffer said that they had seen their games, as well as older point-and-click titles, popularized on streaming channels. Furthermore, when they premiered Tales from the Borderlands at the Alamo Drafthouse, they found the audience shouting out which choices the demonstrators should take. This led to them working to create a more interactive experience for watchers. They premiered this feature at the San Diego Comic-Con in July 2016 to 500 attendees.

While responding to a break-in at the Gotham City Hall, Batman engages in combat with a group of mercenaries and Catwoman, the latter having broken into the Mayor's safe and stolen a drive. During the fight, Batman steals the drive whilst she manages to escape. Returning to Wayne Manor, Bruce endorses Harvey Dent's Mayoral campaign against Hamilton Hill, during which he meets crime lord Carmine Falcone. While investigating and decrypting the drive, Bruce receives word from Alfred that his childhood friend Oswald Cobblepot, now a criminal called "Penguin", has returned to Gotham. Meeting up in Cobblepot Park, Oswald warns Bruce of a revolution in Gotham.

Accusations come to light that Thomas and Martha Wayne had affiliations with the Falcone's organization. While meeting Harvey to discuss these claims, Bruce also meets Dent's girlfriend Selina Kyle, where they both deduce each other's identities. Selina reluctantly gives Bruce the address of a meeting place with her employer: a warehouse at the Gotham City docks. Investigating as Batman, he finds the location to be the site of a shootout between the GCPD and the same mercenaries from City Hall. Believing Falcone to be involved, Bruce also finds evidence of a psychoactive agent being stored there. After finishing decryption of the drive, Bruce discovers evidence of Falcone's criminal organization, along with ties to Mayor Hill. After handing it over to either reporter Vicki Vale or Lt. James Gordon, he confronts Falcone as Batman and interrogates him about the shootout. Falcone admits to having ownership of the chemicals, but denies involvement in the shootout. Under further interrogation, he also reveals that the allegations against the Wayne family are true, confirming this with a photograph of them, Hill and Falcone. When Bruce confronts Alfred, he learns that his parents collaborated with Falcone and Hill to control Gotham and that he had hidden the truth in the hopes he would not follow their footsteps.