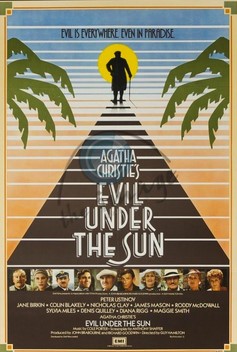 Evil Under The Sun features Hercule Poirot as the protagonist, unlike the previous game in the series, Agatha Christie: Murder on the Orient Express, which had featured Poirot as a non-playable character. It also features numerous improvements and expanded gameplay elements, with a new inventory system, dialogue choices, and more environments. While players take the role of Poirot, they are actually playing as Captain Hastings playing as Poirot, in an interactive scenario designed by Poirot in order to allow his long-time friend a chance to solve the mystery in the way Poirot would.

The game's plot follows Poirot as he investigates the murder of a noted actress on an island. It is divided into two sections: story-time, in which Poirot uncovers the secrets of Seadrift Island and real-time, in Poirot's office in London in which the player, as Captain Hastings, can request hints, review information and consult the locations of the suspects on a wall map.

Despite the fact that the murderer remains the same, new plot aspects are included, such as new characters, a slight change of location, and the fact that Hastings becomes a part of the plot. Poirot's voice is performed by actor Kevin Delaney.

(3) Comments on "Agatha Christie: Evil Under the Sun Full Version"