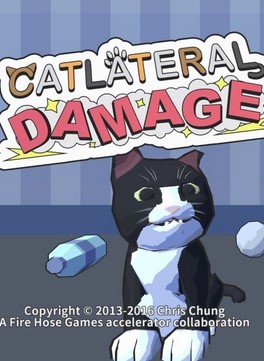 Catlateral Damage is a first-person video game in which the player plays as a cat. The goal of the game is to knock as many of the player character's owner's belongings onto the floor as possible. There are game modes in which the player can either race against the clock and get a certain number of items onto the floor as fast as they can, score as many points in a 2-minute time-frame, or a free play mode where there is no clock and there are no points.

The original version of Catlateral Damage was created for the August 2013 7DFPS game jam. Development for a full release began in September 2013.

BuzzFeed's Joseph Bernstein reviewed the original Catlateral Damage favorably citing "If you have ever wanted to know what it is like to be a little feline menace, this is your chance."

Kotaku's Luke Plunkett reviewed the original Catlateral Damage as "as accurate a cat simulator as you'll ever play."

Rock, Paper, Shotgun's Nathan Grayson reviewed the original Catlateral Damage as "basic and inconsequential as can be, and that's exactly what I wanted from it. Be a cat. Do total jerkstore asshole cat things. The end."

Indie Statik's Chris Priestman reviewed the alpha release of Catlateral Damage as "a fun little game about making a mess. What's not to love?"

Joystiq's Danny Cowan reviewed the alpha release of Catlateral Damage favorably with "For anyone who has never owned cats, this is a fairly accurate simulation of what their day-to-day life entails."

VG247's Mike Irving reviewed the alpha release of Catlateral Damage as "small and rough at the moment" but found the game "entertaining."