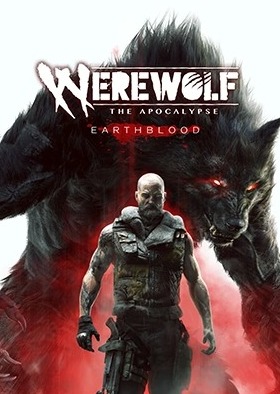 Werewolf: The Apocalypse – Earthblood is an action role-playing video game developed by Cyanide and published by Nacon. It is based on White Wolf Publishing's tabletop role-playing game Werewolf: The Apocalypse, and is part of the larger World of Darkness series. The game was released on February 4, 2021 for Microsoft Windows, PlayStation 4, PlayStation 5, Xbox One, and Xbox Series X.

The story follows Cahal, an eco-terrorist werewolf who has been banished from his werewolf tribe, and who fights against the Pentex corporation and the pollution it causes. The player, as Cahal, traverses areas in the American Northwest, and can shapeshift into a wolf, human or werewolf form to perform various tasks, such as exploration, conversation and combat.

Werewolf: The Apocalypse – Earthblood is a third-person, single-player action role-playing game in which the player takes the role of an eco-terrorist werewolf. The player explores various areas in the American Northwest, in the form of large hub worlds. Within these areas, the player plays through missions, which may have effects on the game world, including leading to secondary missions getting unlocked.

The player also goes to Penumbra, a place between the physical world and the spirit world, where they can receive sidequests or challenges from the Great Spirit of the Waterfall, who gives the player rewards for completing them, such as opening shortcuts between areas.

The werewolf is a shapeshifter, and can take on the forms of a wolf and a human in addition to his werewolf form. Each form has its own gameplay mechanics tied to it: the wolf form is used for exploration, tracking, spying, and stealth, as well as being able to pass through narrow passages; the human form is used for interactions, such as using machines and conversing with people; and the werewolf form is used for combat. When in the human form, other characters are not aware that the player character really is a werewolf, allowing the player to go undercover.

The player develops the werewolf through a skill tree, where they can choose between different archetypes connected to different weaknesses and strengths. The player also has access to various supernatural power-ups, which are drawn from nature.

Earthblood takes place in the American Northwest, and is set in the World of Darkness, where supernatural beings, such as vampires and werewolves, secretly struggle for power.

The world is ruled by three entities: the Wyld, a chaotic, creative force that creates life and oversees nature; the Weaver, which is tasked to give form to the Wyld's creativity, organizing Earth; and the Wyrm, which originally existed as a balancing force between the Wyld and the Weaver, originally a force of breakdown and renewal, but which has become like a black hole trying to destroy everything due to how powerful the Weaver has gotten, and which corrupts humans easily.

The game focuses on werewolves, known as Garou, whose nation consists of thirteen tribes called the Garou Nation. Whereas vampires integrate into human societies, werewolves are recluses, and are portrayed as the "immune system of the planet", working to protect nature.

Different tribes have different views on how to achieve this and how to deal with humanity: for example, the Glass Walkers think that humanity can get out of environmental problems with the use of technology; the Black Furies fight for feminism, women's rights and gender equality; the Bone Gnawers care about social class and fight for economically oppressed people; and the Red Talons would like to wage war against humanity to see who will survive. Due to their varying perspectives, there is a lot of in-fighting between the tribes.

The game follows the werewolf Cahal, who left his tribe, the familial Fianna tribe of Irish werewolves, after accidentally killing another tribe member, but returns to protect it and master his rage after discovering a new threat.

On his quest for redemption, he partakes in the Great War of the Garou to fight the powerful Pentex corporation, which causes pollution and environmental problems, and knowingly serves the Wyrm to tap into its power, and whose oil-producing subsidiary Endron is installing an extraction site by a sanctuary.