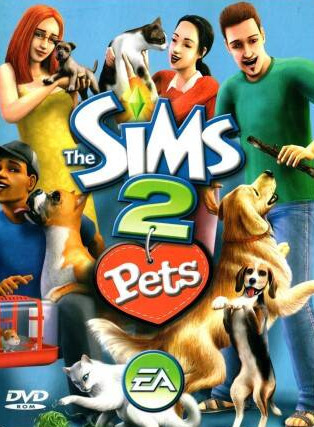 It was released for the Wii on June 12, 2007. In Australia, one Australian dollar per game sold, from at least 50,000 copies of the game, was donated to the RSPCA. Unlike the other expansions, this game does not have a new neighborhood. Instead, new lots (with Sims living in them) are available for placement in the existing neighborhoods. The Sims 2: Pets has sold over 6 million copies.

Sims can own cats, dogs, birds and gerbils. Pets features 75 pre-made breeds of dogs and thirty pre-made breeds of cats. Create-A-Pet is similar to "Create-a-Sim", where a user builds a human Sim characters. In Create-a-Pet, players may customize a cat or dog by choosing patterns and colors of coat, body shape, facial structure, and personality, which determines playfulness, neatness, loyalty, aggression, and intelligence.

Pets have motives like their Sim counterparts. Sims and pets are similar except for the absence of the "Room" motive, which "Scratching" replaces in cats and "Chewing" in dogs. Sims may also train their pets to do various tricks.

Pets can follow one of three career paths: Security, Showbiz and Services. When pets get promoted, various pet-related "unlockables" are made available along with a code so players can share these items with others.

Pets have three life stages: Puppy/Kitten, Adult, and Elder. The length of a pet's elder hood is selected at random, however there is an aspiration reward object which will extend the pet's life by a few days with each use. Pets are able to breed, and doing so will produce a litter. The number of puppies or kittens is dependent on the number of Sims and pets currently in the house. Players can play with up to eight Sims or six pets at one time, although one can only have a total of six Sims and/or pets in a household altogether.

Pets can be trained to do various tricks, and they can be scolded or praised. The tricks include sit, stay, shake, come here, guard, roll over, sing, and more. In the Nintendo Game Boy Advance version, they can be taught to stand up on two legs and juggle, or other unusual tricks. When the pet learns a new trick, it adds to the Sim and pet relationship. If the pet does something bad, it is able to be scolded. There are a few unpleasant acts: pets may relieve themselves where it is inappropriate, dig up the yard, chew up the newspaper or floor, scratch up furniture, or dig out the trash. It is helpful to praise a pet after it has done something favorable. It can also be given a treat after praising it to do the favorable action or completing a trick.

Werewolves are a type of supernatural creature which the Sim can interact with or even be transformed into. Sims exist as Werewolves only during night hours. During these hours, the werewolf's energy will go up, but their hunger will decrease more quickly as well. A Werewolf can teach a pet faster than humans and can fight against burglars. They might occasionally howl at the moon, howl at player's command, or howl to summon wolves.

Pets received a "Gold" sales award from the Entertainment and Leisure Software Publishers Association (ELSPA), indicating sales of at least 200,000 copies in the United Kingdom.