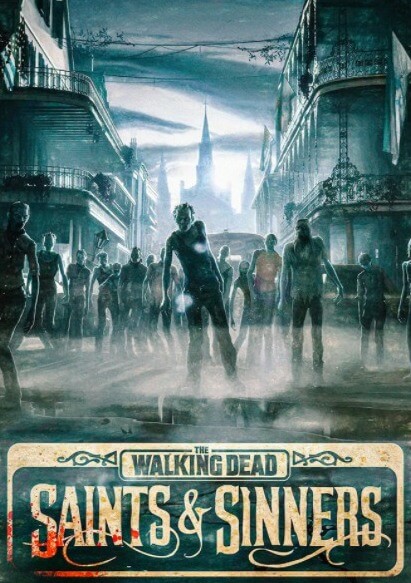 Players can hide behind cover and pick up or craft different weapons. Players will be able to scale buildings to ambush enemies and attack from a distance with throwing weapons, bows, and long-range firearms. Physics-based combat will control how melee weapons are controlled. There is a timer on the game called "The Bells," where after a certain time, the Tower rings the bells to "Stir the Herd" Once the bells are rung, a horde is spawned in and chases after the player.

The game is set in New Orleans, the player is taking place as The Tourist, whom is either male or female depending on the player's choice. The player then meets an old man called Henri who tells the legend of The Reserve, an old military bunker filled with supplies and weapons. Henri also explains that there are two factions attempting to take control of New Orleans, the Reclaimed and the Tower. While in a boat, the player gets swarmed by a horde and crashes onto a cemetery, after navigating the cemetery, the player finds Henri strung upside down and close to death, the player can either talk to him and find out what happened or let him die. After Henri is dead, the player finds a broken down bus made into a survival shelter where Henri was doing his research. In the bus the player finds some food, old military codes, and a broken radio, which Henri was trying to repair. The player already has a Automotive battery and an Antenna (radio), the player must then travel to one of the locations to find a Microphone.

After finding the microphone, the player then makes contact with Casey, whom is trapped in the reserve due to a flooding of the bunker. The player then agrees to help Casey get out of the Reserve. Then the player investigates strange noises from a part of the cemetery and finds a coffin where a mysterious person has been gathering intel from the Tower. After finding the intel and putting it in the coffin, the unknown person then asks the player to meet them in front of the church courtyard. The unknown person is revealed to be May Benoit, someone who is wanted by the tower. The player can either listen to May and go through the storyline, or kill May to get the Reserve key immediately and skip the story. After getting all of the intel, May gives you the Reserve key. Casey also wanted the player to get pumping systems to pump out the water in the Reserve. After finding the first two, the player travels to one of the locations and meets JB, the leader of The Reclaimed, who gives the player the water pump after talking as well as the code to control the water pumps, telling the player to flood all of the reserve. After leaving the building that JB is in, the player is stopped by Georgia, the commander of The Tower, who then tells the player to kill JB and they'll forgive the player for all that happened. The player can either tell JB that the Tower is right outside their door, or kill JB and let the tower ignore them. After deciding, the player then installs the pump which then lights up the entire Reserve, showing everyone where it is. The player then scrambles to hurry to the church to get to the Reserve, where everyone is fighting. If the player chose to kill JB, then the Tower will not attack the player, if not though, the Tower will attack the player as well. After making it inside the building, the player can then either flood the communication room where Casey is trapped in, or flood the armory where the weapons and supplies are stored, or flood everything. If the player floods the Armory, then Casey will come out in the church. May is tugging on a rope to send the horde after the factions that are fighting, the player can either choose to kill May, or let may pull the bells and kill everyone. After deciding, the player heads down into what's left in the Reserve, gets whatever supplies they can manage, and leaves on a boat.

The game has received generally favorable reviews from critics according to review aggregator Metacritic. IGN, giving the game a 9 out of 10, described the game as a fantastic example of what VR can be, while Destructoid wrote that the game is one of the leading VR experiences to date and gave the game a 7.5 out of 10.