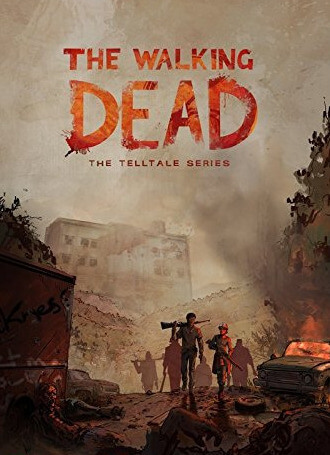 The game takes place in the same fictional world as the comic, with events occurring shortly after the onset of the zombie apocalypse in Georgia. However, most of the characters are original to the game, which centers on university professor and convicted criminal Lee Everett, who rescues and subsequently takes care of a young girl named Clementine. Lee becomes a protective figure to her to help reunite her with her parents. Kirkman provided oversight for the game's story to ensure it corresponded to the tone of the comic, but allowed Telltale to handle the bulk of the developmental work and story specifics. Some characters from the original comic book series also make in-game appearances.

Unlike many graphic adventure games, The Walking Dead does not emphasize puzzle solving, but instead focuses on story and character development. The story is affected by both the dialogue choices of the player and their actions during quick time events, which can often lead to, for example, certain characters being killed, or an adverse change in the disposition of a certain character or characters towards Lee. The choices made by the player carry over from episode to episode. Choices were tracked by Telltale, and used to influence their writing in later episodes.

The Walking Dead has been critically acclaimed, with reviewers praising the harsh emotional tone of the story and the empathetic connection established between Lee and Clementine. It won year-end accolades, including Game of the Year awards from several gaming publications and is considered to be one of the greatest video games of all time. More than one million unique players have purchased at least one episode from the series, with over 8.5 million individual units sold by the end of 2012, and its success has been seen as constituting a revitalization of the weakened adventure game genre. In July 2013, Telltale released an additional downloadable episode, 400 Days, to extend the first season and bridge the gap towards Telltale's second season, released later that year. Season 3 and Season 4 of The Walking Dead were released in 2016 and 2018, respectively.

The Walking Dead is a graphic adventure, played from a third-person perspective with a variety of cinematic camera angles, in which the player, as protagonist Lee Everett, works with a rag-tag group of survivors to stay alive in the midst of a zombie apocalypse. The player can examine and interact with characters and items, and must make use of inventory items and the environment. Throughout the game, the player is presented with the ability to interact with their surroundings, and options to determine the nature of that interaction. For example, the player may be able to look at a character, talk to that character, or if they are carrying an item, offer it to the character or ask them about it. According to Robert Kirkman, The Walking Dead game is focused more on developing characters and story, and less on the action tropes that tend to feature in other zombie-based games, such as Left 4 Dead.

Some parts of the game require timed responses from the player, often leading to significant decisions that will impact the game's story, in the manner of role-playing games (RPGs). Some conversation trees require the player to make a selection within a limited time, otherwise Lee will remain quiet, which can affect how other characters respond to him. Unlike in other RPGs such as the Mass Effect or Fallout series, where choices fall on either side of a "good or evil" scale, the choices within The Walking Dead have ambiguous results, having an effect on the attitude of the non-player characters towards Lee. The player can opt to enable a "choice notification" feature, in which the game's interface indicates that a character has changed their disposition towards Lee as a result of these choices. In more action-based sequences, the player must follow on-screen prompts for quick time events (QTEs) so as to keep themselves or other characters alive. If the player dies, the game restarts from just prior to the QTE. Other timed situations involve major decisions, such as choosing which of two characters to keep alive.

Each episode contains five points where the player must make a significant decision, choosing from one of two available options. Through Telltale's servers, the game tracks how many players selected which option and lets the player compare their choices to the rest of the player base. The game can be completed regardless of what choices are made in these situations; the main events of the story, as described below, will continue regardless of what choices are made, but the presence and behavior of the non-player characters in later scenes will be affected by these choices. The game does allow the player to make multiple saves, and includes a "rewind" feature where the player can back up and alter a previous decision, thus facilitating the exploration of alternative choices.

The Walking Dead occurs simultaneously with the events from the original comic series, where a zombie apocalypse overwhelms much of society. Characters in the game come to call the zombies "walkers", due to the slowness of their movement. Although the survivors initially think that being bitten by a zombie is the only way to become infected, it is later discovered that one becomes a zombie upon death irrespective of the manner in which one dies; only by damaging the brain can the reanimation be stopped. As with the comic and television series, the game's events occur in the state of Georgia.