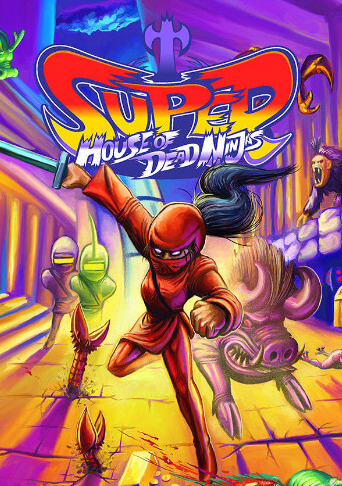 Super House of Dead Ninjas is a platform game developed by Megadev and published by Adult Swim Games for the PC Windows in 2013. The game is available as a freeware browser game on the Adult Swim website and in an expanded paid version on Steam.

The player plays as a ninja and is tasked with making their way down a randomly generated 350 story tower. Players only have a limited time to get down all 350 stories, however power ups can increase the time. The players character also has a special meter that allows them extra power when it's filled up. Attacking enemies while the meter is full will increase the length of time they can stay in this mode. Upgradable weapons and items are also available.

Super House of Dead Ninjas received mostly favorable reviews, resulting in the averaged score of 79/100 at Metacritic. Nikola Suprak of Hardcore Gamer described it as "bloody, violent, difficult and a sadistic kind of fun that makes it hard to put down (...) cramming every second of gameplay with as much blood, combat, and fun as possible, a game that is really hard to pass up at its meager asking price, and even harder to stop playing." In an also positive review, Destructoid's Fraser Brown opined "the instant challenge and frantic pace makes it perfect to just pick up and play for 15 minutes, while the tight controls and potentially limitless number of floors makes it easy to pour hours into," but recommended to first try out the game's free version.