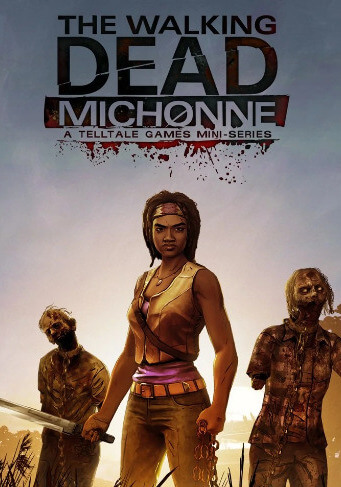 The Walking Dead: Michonne is an episodic adventure video game based on The Walking Dead comic book series by Telltale Games. Taking place between issues 126 and 139 of the comic series, the game shows events of what Michonne was up to during her temporary departure from the group of survivors led by Rick Grimes in the midst of a zombie apocalypse. Samira Wiley voiced Michonne in the game. The three-episode series was released between February and April 2016 for Microsoft Windows personal computers, the PlayStation 3 and 4 consoles, the Xbox 360 and One consoles, and mobile devices.

The three episode miniseries follows Michonne's journey after leaving Rick Grimes' trusted group in issue 126, and what brought her back to the group in issue 139. It also serves as a tie-in between the existing The Walking Dead seasons developed by Telltale Games.

The story begins with Michonne on a boat with four men, having flashbacks about abandoning her two daughters, Colette and Elodie. She considers suicide, and if she proceeds, she is stopped in the act by Pete, the boat's leader. They receive a radio signal from an area known as Mobjack, and Michonne and Pete disembark to the area. Their search leads them to an abandoned boat. Upon entering, they find two people chained to the doors, shot in the head, to ensure they couldn't turn to walkers. They scavenge around, but are ambushed by Samantha and Greg - two siblings also searching for supplies. Whilst fighting off walkers, the group is taken hostage by Randall, a man part of a larger group under the leadership of his sister, Norma, who are hunting Sam and Greg for stealing their supplies from their town.

The group is taken to a bayou-like community called Monroe, where Michonne and Samantha are left in a ship's storage room, where Samantha apologizes for her behavior and tries to get Michonne to ambush Randall - a choice for the player. Randall brings Michonne up to Norma. Michonne is questioned by Norma, where the player can comply or refuse. Norma warns Michonne that Samantha is a liar, and that she shouldn't be trusted. Greg is also brought up for questioning, though he lies to Norma, forcing Michonne to either help him, herself or keep silent.

Randall forces Zachary, a younger member of the ship, to question Michonne, Greg and Samantha. Zachary unintentionally shoots Greg, forcing Michonne to destroy his brain so he doesn't turn. A distraught Samantha tries to get revenge by killing Zachary, something Michonne can agree or disagree to. Either way, Michonne and Sam rescue Pete and they fight their way out of Monroe. Pete offers to give himself up to save Michonne and Sam, something Michonne can agree or disagree to. Sam suggests that they hide at her family's home, but is shot in the shoulder and wounded by Randall during their escape.

The group arrives at Sam's home where they meet her father, John, her younger brothers, James and Alex, and her best friend, Paige. With the help of the family, Michonne removes the bullet from Sam's shoulder and cauterizes her wound - saving her life. While Sam rests, Michonne learns from both Paige and John that Sam's mother had committed suicide due to the harsh reality of the apocalypse, which takes a toll on the family.

By neglecting to close their gate, John is suddenly shot and killed by Randall, who assaults the house with the assistance of two other men from Monroe. Michonne and Pete (if he didn't leave) manage to kill the two men and, with the help of Paige, manages to subdue Randall and hold him hostage in the house's garage. Norma tries to contact Randall via radio demanding to know his whereabouts. Michonne can realize that Randall could be used as a bargaining chip and can tell Norma that Randall has been captured and awaits her arrival to reclaim him. Alternatively, she can choose not to answer the radio or somehow cheat Norma. As the rest of the group prepare for the upcoming conflict, Randall tries to provoke Michonne and coerce her into killing him, something Michonne can agree or disagree to.

Sam then storms off to bury her father, as her bandage ripped off and argues with Paige about what happened. She apologizes to Michonne due to her angerments behavior, thanking Michonne for helping her and tries to bring her father to grave, something Michonne can agree or disagree to.

Norma and the remaining survivors of Monroe arrive at the house and ask Michonne to exchange Randall for the rest of Pete's crew, who are revealed to have been captured. If Randall was murdered, they attempt to cheat Norma with his now reanimated corpse. The exchange goes smoothly at first until an angry Monroe survivor (such as Jonas or Gabby) kills one of Pete's men as revenge for the destruction of Monroe. This provokes a gunfight between the two groups which attracts the attention of a herd of walkers. During the gunfight, Norma attacks Michonne and the two fight until Michonne cuts off Norma's arm and lets her get devoured by walkers. Michonne and her group retreat to the house to hold fort, but two Monroe men throw Molotov cocktails into the house, setting it ablaze.

Michonne and Sam make their way through the burning house to find James and Alex, who have hidden upstairs. As they climb out of an open window, Michonne is faced with a hallucination in which she first left Colette and Elodie with her ex-husband shortly before the outbreak. She is given the choice of whether or not to leave her children once again. If Michonne decides to stay, Sam manages to grab Michonne and push her out of the house, but ends up dying in the process. If Michonne decides to leave, she apologizes for leaving them and she and Sam manage to escape the house with no other casualties.