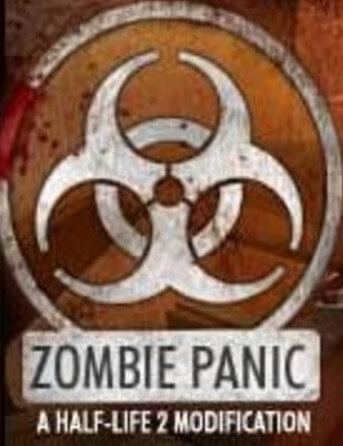 Zombie Panic! Source (ZPS) is a cooperative, survival-horror Half-Life 2 first-person shooter modification. It is the sequel to the popular Half-Life modification Zombie Panic. Set in the middle of a zombie apocalypse, players start as a small group of survivors attempting to stay alive. Each map will have its own objectives to complete and win the round or survive by a period of time.

Initially released on December 28, 2007 via ModDB page as a public beta (v1.0) and later re-released for Steam via Steamworks in October 8, 2008 as a free-to-play game.

At the start of each round, players can either choose to join the human team or volunteer to be the first zombie. If no one volunteers the game will pick one human randomly, and the game begins. The starter zombie's goal is to kill the humans while the human goal is to stay alive as long as possible, complete objectives, or even wipe out all the zombies. The catch is that when a human dies he will simply join the ranks of the undead, now ready to finish off his old living teammates. The humans cannot tell by the player list who is alive and who is undead.

Eventually, there will only be one survivor still standing if everything goes wrong, his back against the wall while facing the animated corpses of his former allies. In a survival round, the zombies team only has a certain number of reinforcements (lives), and when a zombie is killed they lose a life from the counter. However, when a human is killed they gain 1 life. When the zombies run out of lives, the remaining survivors win the round by killing off the remaining undead left on the map. In objective rounds, zombies get an unlimited number of lives while the humans must complete a variety of map-based objectives to win.

On October 8, 2008, it was one of the first five "mods" to be released on Steam by Valve under their new commitment to easily accessible quality user-created modifications in the Steam Store.