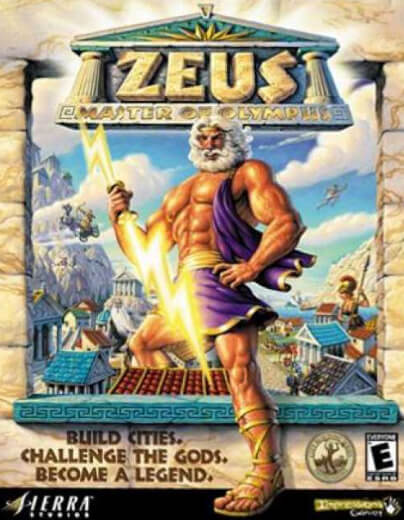 Zeus: Master of Olympus (Zeus) is a single-player strategy game developed by Impressions Games  and published by Sierra Entertainment. It is considered to be an additional instalment in the City Building series of games. Like previous titles in the series, Zeus focuses on the building and development of a city in ancient times. The game features a number of changes from previous titles in the series, including being set in Ancient Greece as well as changes to certain gameplay mechanics, however it is considered to be in most aspects very similar to its predecessor, Caesar III

Zeus is set in a mythical version of ancient Greece and features many of the gods from the Greek pantheon and legendary monsters from ancient Greek mythology. The game chooses not to accurately portray the historical setting in which it is based, choosing instead to include elements based on mythology and anachronisms.

The player is in charge of building up and governing a city state which requires managing infrastructure, farming, industries, commerce, religion, entertainment and education, as well as wars with rival cities. Monsters from Greek mythology feature in the form of natural disasters which must be managed by the player, typically by hiring the correct hero. Sufficiently worshipping the Greek gods will cause them to bestow blessings on the player's city which provide a material benefit.

The game features 2d graphics and offers an isometric view of the game world. A side panel and a number of menus allow the player to more easily navigate the map and to micro-manage various aspects of government, such as tax rates and wages.

Zeus grants players the choice to play either a series of episodical, story-based adventures, in which a set of unique objectives must be attained in order to progress, or to play the so-called "sandbox mode", in which the game's objectives are more open-ended and less objective-based.

Zeus: Master of Olympus received generally favorable reviews with a rating of 87 on Metacritic. IGN reviewer Stephen Butts stated that he "had to tear himself away from the game to write the review." The game received criticism for its combat and war mechanics.

In May 2012 the game was re-released on GOG.com together with its expansion as a part of the Acropolis bundle where it holds a 5-star rating.

In 2018, Alice Bell of Rock, Paper, Shotgun included the game in the site's "Have You Played" series, describing it as "the perfect balance of beauty, difficulty, detail, and puns."