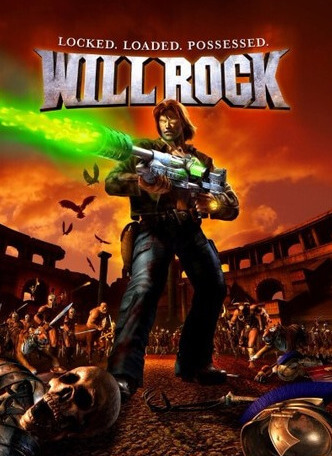 Will Rock is a first-person shooter released in North America on June 9 and Europe on June 13, 2003. It was developed by Saber Interactive and published by Ubi Soft. It received polarized review, with scores of 90s down to 20s, and some likened the title to a poorer version of Serious Sam.

In Will Rock, the player takes on the persona of the title character Willford Rockwell, an archeology student, who is faced with the aftermath of a fanatical group called the Olympian Restoration Army (ORA), who have managed to bring back to life a host of mythological creatures from Ancient Greece, including Zeus, king of the Gods, who has abducted Will's girlfriend Emma. Will is recruited by Prometheus, the Greek Titan of fire and craft, to destroy Zeus and his minions—and rescue his girlfriend.

There are ten levels in the single player and coop versions. Many reviewers noted the massive numbers of enemies, prompting IGN to remark that it "elevates the experience to a kind of inspired lunacy."

(0) Comments on "Will Rock Full Version"