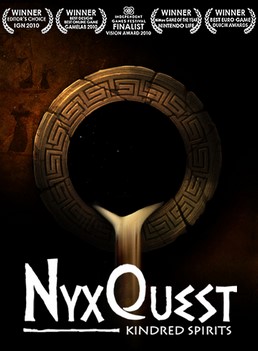 NyxQuest: Kindred Spirits (formerly Icarian: Kindred Spirits) is a game, originally released for WiiWare by Spanish developers Over the Top Games. It was released in the PAL regions on June 19, 2009, in North America on August 10, 200 and in Japan on May 11, 2010. A demo of the game was released in North America on November 16, 2009. Versions for Windows and Mac OS X were released on September 27, 201 through the game's official website and Steam. The game was ported to the iOS as NyxQuest on July 6, 2011.

As the protagonists Icarus and Nyx progress through the game, players will be given special powers by gods such as Zeus and Eolus which gives them the ability to move objects, manipulate the scenery, control the wind and to cast rays to kill enemies.

Wii Players control Nyx and the powers of the gods by using the Wii Remote and Nunchuk. Players use the analogue stick on the Nunchuk to move Nyx and control her flight, while powers are cast by pointing at the screen and onto different objects with an onscreen reticule. The Wii version also features a two-player cooperative mode, with one player directly controlling Nyx and the other controlling the gods' powers.

The game is set in Ancient Greece and incorporates mythological creatures and the Greek gods into the world of the game. Players control Nyx, a winged girl, who has befriended Icarus after he flies to her realm in the sky. When Icarus mysteriously disappears, Nyx sets out to find him in the ruined world below.

NyxQuest: Kindred Spirits is Over the Top's first project as a company, and was developed by a team of four people. The developer decided to use the Ancient Greece setting to explore the idea of a character that requires help from the Greek gods to advance in their adventure, and chose the Wii as a platform to take advantage of gameplay mechanics that use the Wii Remote. The team also wanted to create a game that had a flying character with wings. In early prototypes of the game, Icarus was the main playable character, but was changed to Nyx to make the story more interesting.

The game features 19 minutes of music from composer Steven Gutheinz. The developers only intended to use five minutes of music but were impressed enough to use everything he had composed for the project. Gutheinz worked from concept drawings, screenshots and video from the unfinished game to develop the soundtrack.1

The game was originally released under the name Icarian: Kindred Spirits, but was changed due to legal reasons.1 A port of the game for Windows and Mac OS X computers was announced on September 9, 20101 and released on September 27, 2010 through the game's official website and Steam. It features enhanced graphics and is controlled with the keyboard and mouse. The version from the official website is completely DRM free, while the Steam version is SteamPlay enabled and includes Steam Achievements. The two-player mode is missing from the PC port. Demos for both Windows and Mac OS X versions are available on the game's website.1