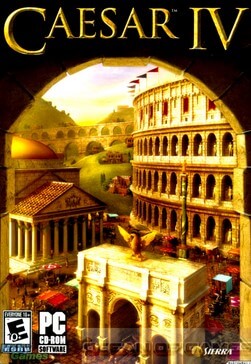 Caesar IV is a city-building game set in ancient Rome, developed by Tilted Mill Entertainment. The game was released on September 26, 2006 in North America. The game features a three-dimensional game engine and individual modeling of game character behaviors.

Like its original release Caesar in 1992, the game simulates city administration in historical Rome. Like its sibling release Children of the Nile in 2004, the game continues a new trend in the city building game genre to use more interactive and detailed game video game design and play.

In a departure from older versions in the series, Caesar IV is equipped with variable, realistic 3D instead of fixed, isometric 3D. This means more realistic landscapes and city views, and the ability for players to better see and use game building space. In addition, buildings and roads may be placed at 45 degree angles to the playing grid, as well as aligned with the grid, allowing game players more options in creating efficient and visually appealing city layouts.

In an attempt at historical realism, the game tries to stay as close to proper Roman lifestyles as possible. To this end, Sierra Games did detailed research into Roman lifestyles using secondary sources and primary sources.citation needed

The game is divided in three parts, named after the three traditional eras of Ancient Rome: "Kingdom", "Republic" and "Empire". The Kingdom part is a tutorial, while the Republic and Empire parts make up the campaign, where one can choose between peaceful and military assignments. There are still five more scenarios that are sandboxes: Amida, Corduba, Cyrene, Djedu and Roma. The last is only available for people who pre-ordered the game directly from Tilted Mill Entertainment. In all these scenarios the rank that is used is "Quaestor". There is also a level editor available for the game.