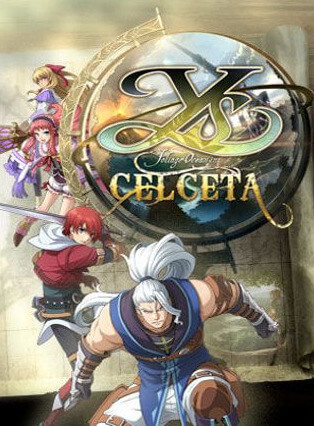 Ys: Memories of Celceta is an action role-playing game developed by Nihon Falcom. The game was originally released for the PlayStation Vita in Japan in September 2012, and later in North America by Xseed Games in November 2013, and in PAL regions by NIS America in February 2014. A Microsoft Windows version was released in China in 2015, and worldwide in July 2018. A PlayStation 4 version was released in Japan in May 2019 and is due for release in North America in Spring 2020.

Memories of Celceta is identified by Nihon Falcom as the 4th canonical game in the series, after they had outsourced the development of Ys IV: Mask of the Sun and Ys IV: The Dawn of Ys in the 1990s. The game follows the usual series protagonist Adol Christin, who begins the game with amnesia, as he explores the forests of Celceta with his companions.

Gameplay of Memories of Celceta is similar to other Ys titles, as it is an action role-playing game featuring real-time combat. In addition to a standard attack button, special moves called Skills can be utilized by pressing certain button combinations. Throughout most of the game, the main protagonist Adol is accompanied by Duren, but other party members also join at different times. Each member has a specific attack type classified into three types: Slash, Strike, and Pierce. Some enemies are weak against a certain type of attack and are resistant to the other two; other enemies have no particular weakness and thus any attack type is effective. A maximum of three characters can be used at a time, and can be switched on-the-fly. Each character has a powerful move called an EXTRA move that can only be used when the meter is filled. Various accessories can be equipped giving various passive bonuses. The eight different statistics of weapons and armor can be customized by reinforcing with different minerals, plant and animal materials. Furthermore, players can attempt to parry attacks, evade them shortly before the attack lands, or take a defensive stance to reduce damage taken. A successful parry is known as a flash guard, nullifies only the parried hit's damage, earns skill points, and turns any successful ripostes into critical attacks. A successful evasion shortly before they would land is known as a flash move, makes the party temporarily invincible, and slows down the enemy. Also, the game makes use of both the touchscreen and rear touch pad to provide useful features.

The game takes place a year after the events of Ys II, and about a year before Ys: The Oath in Felghana. The game is set in the land of Celceta, and begins when the series's protagonist, Adol Christin, arrives in the town of Casnan with amnesia due to unknown reasons. Then, he meets an information dealer, Duren, who claims to have met him before. Governor-General Griselda, the local ruler, then hires Adol and Duren to explore Celceta and draw a map of it because she nor her government has no full map of the area.

Destructoid's Wesley Ruscher scored the game 9.5/10. He praised the writing, music, and colorful graphics, and described the combat as a more "fast and frantic" version of what is found in the Zelda series, without becoming "overly complicated". Ruscher appreciated the "streamlined and efficient" gameplay, such as simplified crafting and quest systems, one-button special moves, and a fast-travel and waypoint mechanic that kept backtracking from becoming tedious.

Game Informer's Kimberley Wallace gave Memories of Celceta 8.50/10. She appreciated that combat required strategy and thoughtfulness, rather than mindless button-mashing, yielding different effects and rewards based on play style while remaining "easy to pick up". Wallace found that her decisions in the "easy-to-grasp" crafting system allowed her to "make battles play out quickly", while the party members' unique skills were well-utilized both in dungeons and during combat. However, she thought that the plot was "clichéd" and "uninteresting", and that the fast-travel system was too cumbersome until partway through the game.

Bradly Hale of Hardcore Gamer gave the game a 4.5/5, calling it "one of the Vita’s most prized RPGs, and realistically, one of its best titles."