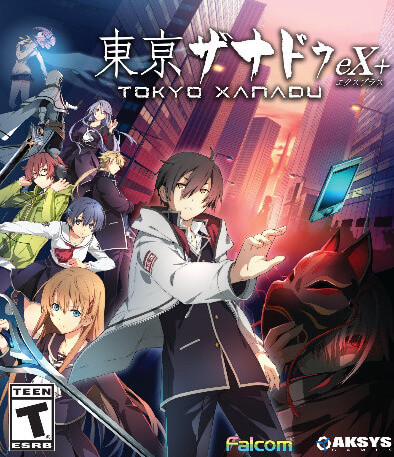 Tokyo Xanadu is an action role-playing game developed by Nihon Falcom. The game is a part of the Xanadu series, and was developed out of Nihon Falcom's desire to create a game of a different type and setting than their other role-playing game franchises, The Legend of Heroes and Ys. The game was first released in Japan for the PlayStation Vita in September 2015, and worldwide in June 2017. An enhanced version of the game, Tokyo Xanadu eX+, was released in Japan for the PlayStation 4 in September 2016, and worldwide in December 2017, in addition to a Microsoft Windows version.

It is an action role-playing game with party-based real-time combat that features dungeon exploration, similar to the Persona series by Atlus, as well as Falcom's own Ys and Trails of Cold Steel franchises.

In an alternate reality, Tokyo was hit by a huge earthquake in 2005 that the city took 10 years to recover from. In 2015, Kou Tokisaka is a high school student who lives in Morimiya on the outskirts of Tokyo. He lives alone and has some part time jobs. One day after work, late at night, he sees his classmate Asuka Hiiragi is around some bad company. Kou follows them to a back alley. When he tries to get in between them, he is sucked into a vortex that brings him to the nightmare realm Eclipse. Afterwards Asuka explains to Kou she is a member of Nemesis, a group that tries to close the Eclipse vortexes for good.

Falcom first announced the game's title on December 17, 2014. The company referred to the game as an "urban myth action rpg". They also emphasized that they wanted to create a game with a different feel than their other role-playing game franchises, such as the Ys, The Legend of Heroes, and Trails in the Sky series. While being based off the Xanadu series, which includes Xanadu (1985) and Xanadu Next (2005), Falcom set out to create a game with a different feel than their other fantasy-based role-playing game franchises, with the game taking place in a fictional district of modern-day Tokyo called Morimiya City, incorporating the use of elements not seen in their other series, such as smartphones. Morimiya was based on actual locations near Nihon Falcom's head offices in Tachikawa. For example, the Morimiya Station Plaza, with its red arch monument, closely resembles the north exit of Tachikawa Station, which has a similar-looking blue arch monument. Falcom held promotional activities at various real-world locations in Tachikawa, including a Tokyo Xanadu-themed menu at the cafe in Books Orion, an actual Japanese bookstore chain with a location in Tachikawa that appears in-game.

The game released for the PlayStation Vita in Japan on September 30, 2015. An English version of the game was not announced for almost a year after its initial Japanese release, leaving the game's fate in the West uncertain at the time. Journalists had considered it as a likely candidate for game localization by Xseed Games, due to their close relationship with Falcom from localizing entries in their Ys and Trails games. Other journalists mistook the Xanadu related trademark leaked in January 2015 as a sign of it being translated by XSeed, though this was actually in reference to Xanadu Next. USGamer described the game's chances of being localized as "extremely strong".

An enhanced version of the game for the PlayStation 4, Tokyo Xanadu eX+, released in Japan on September 8, 2016. The PS4 version contains improved graphical fidelity and an improved frame rate, as well as additional story content in the form of extra side-stories and post-game content. It was released in Japan on September 8, 2016. In July 2016, Aksys Games announced that they would be localizing the Vita version of the game in English, which was later announced to be on June 30, 2017. Additionally, they contracted United Kingdom games publisher Ghostlight to help port eX+ to Microsoft Windows, where it was released on December 8, 2017.

Famitsu gave the game a review score of 32/40. The game sold a total of 88,879 physical retail copies within its first week of release in Japan, topping the software sales charts for that particular week, with over 112,000 copies being sold within three weeks.