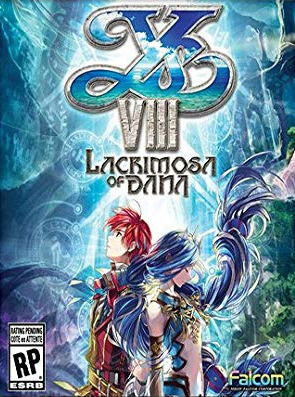 Ys VIII: Lacrimosa of Dana is an action role-playing game developed by Nihon Falcom and published in North America and Europe by NIS America. A part of the Ys series, it first released in Japan by Falcom for the PlayStation Vita in July 2016, with later worldwide releases for PlayStation 4, Microsoft Windows, Nintendo Switch, Android, and iOS. It had sold over 500,000 copies worldwide by the end of 2018.

Passing the archipelagos of the Gaete Sea located south of mainland Greek, Adol is on a passenger ship called the Lombardia that is headed from Xandria to the continent of Eresia. However, the ship is attacked and sunk by a giant creature, and when Adol wakes up, he realizes he landed on the shore of a cursed island known as the Isle of Seiren. On his search for other survivors, he teams up with the noblewoman Laxia von Roswell and fisherman Sahad Nautilus to help his fellow castaways to survive and find a way to get off the island. At the same time, he wants to find out what lies behind his dreams about Dana Iclucia, a mysterious girl from a prehistoric era who seemingly has a connection to the Isle of Seiren and Adol's fate.

Adol's party is soon expanded to include Hummel Trabaldo, a transporter who was a passenger on the Lombardia, and Ricotta Beldine, a resident of the Isle of Seiren. While exploring the island for additional castaways, Laxia notes the creatures on the island are unlike anything known to the outside world. Citing her father's academic research, she concludes that the monsters are an extinct group of animals known as Primordials. Further exploration in the north of the island leads the group to the ruins of an ancient civilization known as Eternia, whose residents possessed a power known as Essence. It is here where the party discovers Dana, waking from a deep slumber, telling the group she is the last of the Eternians but does not know why, nor why she is alive in the current era, as she is suffering from amnesia.

The castaways begin to build a ship to escape the island; Adol's party continues to explore the island from clues on what sank the Lombardia. After research into the matter, it is discovered that a Primordial known as the Oceanus was responsible for the sinking of their ship, as it has historically attacked ships since before Dana's era. The castaways band together and defeat the Oceanus, allowing for safe travel in the surrounding sea. However, questions surrounding the Primordials and Dana's situation lead the group to continue to explore the island. By doing this, Dana begins to slowly regain her memories. She discovers that multiple meteorites crashed into Eternia long ago, killing many people and triggering events akin to a nuclear winter which led to the extinction of Eternians. This event was brought forth by a process called the Lacrimosa, which triggers an extinction event after the primary species on earth has run its course. During each Lacrimosa, one member of the species is chosen to survive and become an immortal Warden of Evolution, one who watches over the Lacrimosa and ensures the process is successfully carried out. Dana was chosen to be the protector representing Eternians; however, she resisted and put herself into a deep sleep until the next Lacrimosa would occur. Dana awoke in the present because the current Lacrimosa was beginning: the extinction of humans, to be accomplished through the revival of Primordials as the primary species. Consequently, Adol is selected to be the next Warden of Evolution, representing the human species.

With Dana's help, Adol's crew becomes the first group to resist the Lacrimosa, ending the process and ensuring the continued survival of the human race. However, stopping the Lacrimosa does not go as planned, and the world begins to collapse. Dana uses her essence to disrupt the end of the world, but dies in the process. Shortly thereafter, while mourning the loss of Dana, the goddess of the world, Maia, makes an appearance, telling the group that Dana's sacrifice has led her to become the Goddess of Evolution, tasked with watching over the world. Dana and the other protectors appear; Dana wishes goodbye to Adol's group, while the other Protectors inform Adol the Lacrimosa may still need to be used in the future to prevent the world from collapsing. After the Protectors and Goddess' disappear, the castaways finish construction of their ship and sail home, parting ways and returning to their normal lives.

Ys VIII: Lacrimosa of Dana is an action role-playing game played from a third-person perspective. Players control multiple main characters, each with their own play styles. The player collects a variety of materials by defeating local wildlife and opening chests. These materials can be crafted into items that the player can use on their journey, such as healing items and stronger weapons.